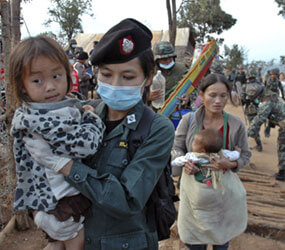 BANGKOK, Thailand – Thailand’s Catholic aid agency was refused access to more than 4,000 ethnic Hmong asylum seekers in northern Thailand, as thousands of Thai soldiers arrived to deport them to Laos.

The Hmong said they faced persecution from the Laotian regime for fighting alongside U.S. forces during the Vietnam War. Thailand claimed they were illegal economic immigrants.

The Catholic agency replaced Doctors Without Borders at the camp in June after the French organization withdrew, claiming military restrictions hindered its humanitarian operations. It is the only aid agency providing assistance to the Hmong asylum seekers.

Thailand ignored opposition to the Hmong deportation from the United Nations, the United States and human rights groups, which said the deportees could face persecution upon their return to Laos.

About 5,000 Thai troops and government authorities entered the camp Dec. 27 to prepare to bus the Hmong over the border. Media reports Dec. 29 said the deportees had arrived in Laos.

Many Laotian Hmong who fought for the U.S. during the Vietnam War fled in 1975 when the communist movement Pathet Lao took over the country. Thousands were resettled in the United States.

The Thai government said it received assurances from the Laotian government that the deportees would not be mistreated.