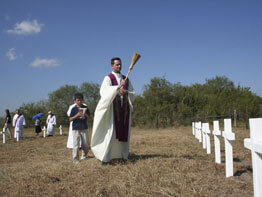 SARITA, Texas – There is little evidence of dignity in the deaths of the undocumented men, women and children found among the south Texas cactus and brush over the past few decades.

Despite the circumstances that prompted them to cross the U.S.-Mexican border and regardless of their legal status in the eyes of the government, Father Piotr Koziel said lending dignity to their final resting place is “the right thing to do.”

Seven years ago the priest made his first trip to Sarita Cemetery, located off a dirt road on the Kenedy Ranch. The site, overgrown with grass and weeds, impacted him in such a way that he recruited others to return and remember those who died in the area but were never identified.

Now each year in preparation for the Nov. 2 feast of All Souls’ blessing of the graves, a group cleans the site and makes improvements to the area where the dead are all but forgotten.

But many of them live on in the memory of Rafael Cuellar Jr., born and reared in Sarita, and a 34-year law enforcement veteran who retired in 2000.

Just as remembering the dead is part of Father Koziel’s job as pastor of St. Gertrude Parish in nearby Kingsville, Cuellar said his job as constable, deputy sheriff and finally sheriff included retrieving the dead from the brush lands of Kenedy County.

“It was awful to see what I have seen,” said Cuellar, who estimated that he buried more than 70 people at the cemetery during his tenure.

Last year, the U.S. government recorded the deaths of more than 450 who died while making their way through south Texas. The numbers dropped by about 100 for 2007. Dehydration, exposure to the extreme heat in the summer and unexpected cold in the winter are among the factors that lead to death.

For Cuellar some of the most devastating deaths were those of people killed by trains in the middle of the night.

“They sleep on the tracks because they are afraid of snakes,” he told the South Texas Catholic, newspaper of the Corpus Christi Diocese. Using a rail for a pillow, they fall asleep and become disoriented when awakened by the sound and blinding lights of the oncoming train.

Cuellar is no longer physically active because of complications from diabetes, but he said he wishes he still had the ability to search the brush. “I still think there are a lot of people out there, dead or dying,” he said.

This year’s cleanup of the cemetery involved a group of students from St. Gertrude School who gathered with their pastor and other members of the community to offer their prayers and labor for the dead.

Others participants were students from the Catholic student organization and Baptist student union at Texas A&M University in Kingsville.

Meanwhile, a handful of parishioners made wooden forms in the shape of crosses and then poured concrete to make sturdy headstones to replace wooden ones. The elementary school students from St. Gertrude put a white coat of paint on each new cross.

On Nov. 2, many who had helped with the cleanup attended the blessing. After Scripture readings and a moment of silent prayer, Father Koziel blessed each grave with holy water. St. Gertrude students followed him placing rosaries and flowers on the headstones.

“These are our brothers and sisters,” said Armando Castellano, a junior at Texas A&M and a member of the Catholic student organization there. “You know how much they suffered.”

Castellano said it is common to meet those who have recently crossed the border on the streets of Kingsville. He added that the ones he has encountered are “very prayerful” and he believes “that’s what got them here.”

“I liked blessing the graves and praying for the people so they could go live in peace in heaven,” said Josephine Bartolazo, a fourth-grader at St. Gertrude.

Sixth-grader Derek Valerio added, “I feel sorry for the people that died and that their family doesn’t know it.” His classmate, Matthew Hewitt, said, “It felt good to do something for them to help them.”

Father Koziel said he had no doubt about the importance of his parishioners being involved in this essential work of mercy and hopes more people become involved in the ministry. And he said it is not the ones they pray for who are helped the most.

“They are dead and with God. It helps us and we realize that we take a lot for granted,” said the priest, a native of Poland, who feels that many immigrants are often misrepresented in the media.

“The way it’s presented makes them look like they are all drug dealers and murderers.” He said those people “have better ways of getting across. They are not the ones we find in Kenedy County.”