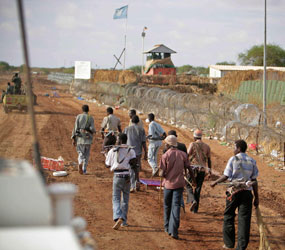 EUGENE, Oregon – Terrified families are fleeing farther south from the ravaged border town of Abyei as northern Sudanese troops continue to burn houses and fire artillery at retreating groups of civilians, said a Catholic priest from the local diocese.

“It has begun to rain, which makes traveling difficult, and the women and children are tired. But they’re afraid to remain any longer even at Agok (a town 20 miles south of Abyei) and so have begun to flee toward towns even more to the south,” Father John Oryem, coordinator of the justice and peace commission for the Diocese of El Obeid, Sudan, told Catholic News Service in a telephone interview.

Abyei is part of the Diocese of El Obeid. Father Oryem said that Father Peter Suleiman, pastor of Our Lady of the Annunciation Parish in Abyei, was currently in El Obeid, having traveled there for a meeting before Sudan attacked Abyei May 21.

Father Oryem said Caritas Internationalis and Catholic Relief Services have been providing food and other emergency supplies for several weeks to people displaced earlier this year by northern attacks around Abyei, and he expected the two organizations would assist the newly displaced.

U.N. officials said up to 40,000 people have been displaced by the new assault. U.N. officials also said their helicopters were fired upon in Abyei May 25.

Father Oryem predicted that the Khartoum government would not withdraw its soldiers, tanks and artillery from Abyei any time soon, though it may turn over control of some of the seized territory to dissident troops that have split off from the Sudan People’s Liberation Army, the military of Southern Sudan. He said Khartoum wants to hold Abyei as a bargaining chip to gain additional concessions from the Juba-based government of Southern Sudan, which will become an independent nation July 9.

“Juba is taking a diplomatic approach at the moment,” Father Oryem said. “Many ordinary people want the South to fight back, but the leaders are being patient. They want peace and are looking to the international community for support. They have been inviting people from around the world to come to the independence ceremonies July 9, and a military confrontation would jeopardize those plans. And the international community can then witness for itself who is the aggressor here.”

A delegation from the U.N. Security Council was in Juba, including Susan Rice, the U.S. ambassador to the United Nations, who told reporters that the invasion “is a grave risk to peace and stability.” She demanded northern troops leave Abyei.

“The withdrawal ought to be immediate, unconditional and complete,” Rice said.

The invasion of Abyei was a “premeditated and well-planned” operation, according to the Satellite Sentinel Project, which uses satellite photos to observe developments in contested areas of Sudan. The group documented a buildup of tanks, helicopters, and military personnel along roads near Abyei in the weeks before the May 21 occupation.

The project also claims to have documentary evidence of possible war crimes and crimes against humanity in Abyei.

A referendum on Abyei’s political future was scheduled for January but never took place because of disagreements over who was eligible to vote. Khartoum insisted that the nomadic Misseriya, a northern-aligned tribe that takes its cattle to Abyei during several months of the dry season, be allowed to participate, but that was rejected by the permanent residents of Abyei, mostly members of the Dinka Ngok tribe who support the Southern Sudan government.

Similar votes are planned for other border areas, including Blue Nile and South Kordofan states, yet Khartoum has dragged its feet on implementation.

John Ashworth, an adviser to the Sudan Ecumenical Forum, said much of the media’s reporting on Sudan misrepresents the Connecticut-sized Abyei region as “disputed” territory.

“It’s disputed, of course, but it’s a very recent dispute. It is clearly Dinka Ngok land and used to be part of the South, while the Misseriya are seasonal nomads, not residents,” he said.

Ashworth, a former priest, said Khartoum’s move into Abyei is not surprising given the position of the North’s ruling National Congress Party.

“The NCP is not happy with southern independence. They have to let the South go, but damned if they’ll let Abyei go, too,” he said.

Moreover, Ashworth said, letting Abyei go “might send the ‘wrong’ signal, as the NCP sees it, to South Kordofan and Blue Nile states.”

“Eventually Khartoum will be able to make a great concession by withdrawing from Abyei and demand something equally great in return,” he said.

Despite developments in Abyei, southern independence is still a safe bet, Ashworth said, in part because of the political maturity of the Sudan People’s Liberation Movement, the ruling party in Southern Sudan.

“I don’t think it will derail southern independence. I also don’t think it will provoke a wider war, at least not in the immediate future. The SPLM appears to be responding politically and not being provoked into war. Of course there is already a proxy war going on in other parts of the South via northern-supported southern rebels, but this is not directly linked to Abyei,” Ashworth said.