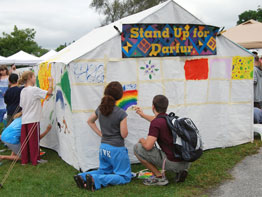 MIDDLEBURY, Vt. – The artwork of students from St. Mary’s School in Middlebury will join a display of about 400 decorated tents assembled on the National Mall Nov. 7-9 to draw attention to the crisis in the Darfur region of Sudan.

The weekend event, “Tents of Hope,” is a national community-based project involving groups that have purchased and decorated canvas tents that will be put on display in Washington and then sent to a refugee camp in Chad to be used as classrooms.

Eileen Gombosi, St. Mary’s art teacher, said the project went along with the school’s tradition of integrity for life.

“That means reaching out to others in our world when they need help. Because our planet is so small, when fellow souls need help, we reach out,” she told The Vermont Catholic Tribune, newspaper of the Burlington Diocese.

The St. Mary’s students painted one wall of a canvas tent Sept. 13 during a weekend when the Middlebury College Chaplain’s Office and the Middlebury Area Clergy Association sponsored the event at a local farmers’ market.

One of the organizers, the Rev. Tim Franklin, pastor of Bridport Congregational Church in Middlebury, said the groups chose to take part in the project because of their belief that “it is important for all people, and especially people of faith, to speak and act for justice in behalf of the powerless and oppressed.”

“The situation in Darfur is immoral and horrific. We wanted to do what we can to bring this crisis before our government and insist that they act by supporting the U.N. mission, getting peacekeepers and much-needed supplies on the ground in Darfur,” he said.

Kathy Boe attended the event with her family, including daughters Sara, a St. Mary’s graduate, and Andrea, a third-grader there. “We came to support St. Mary’s (effort) and as a way to plant a seed of political awareness and awareness of the plight of people in other countries,” she said.

Rev. Franklin said that although the local community has great faith diversity and political diversity there are some things on which all can agree.

“The refugee tent is a symbol of loss (reminding refugees) of what they used to have, what was taken from them, and their longing to return home. Yet, even though the tent represents loss, they immediately humanize their situation by creating a new life,” said Jerry Fowler, director of the Committee on Conscience at the United States Holocaust Memorial Museum.

“In the (refugee) camps in Chad, this is most obvious from the fences and screens they build around their tents with sticks and grass and the little plots they scratch out next to their tents to grow vegetables,” he said.

“Our ability to create and sustain hope in the presence of loss – even enormous loss – is one of humanity’s most exalted characteristics,” he added.

Human rights abuses and other atrocities have been rampant in Sudan’s Darfur region since February 2003 when fighting escalated between rebel groups and government troops and the Janjaweed, or Arab militias.

The conflict has forced more than 2 million people to flee their homes and left more than 200,000 people dead, causing a humanitarian crisis that the United States has described as genocide.