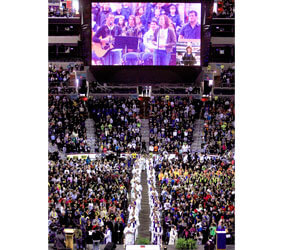 WASHINGTON – At the first youth rally and Mass for life to be held at the D.C. Armory, nearly 10,000 young people from across the country were urged Jan. 24 to more fully live their Catholic faith and embrace the culture of life promoted “by our soon-to-be-beatified Pope John Paul II.”

“If we are going to rid our nation of the tragedy of abortion, then we are going to have to rid our society and ourselves of the culture of death,” said Father Patrick Riffle, parochial vicar at St. Peter Parish in Olney, Md. “The remedy that is needed to cure this plague is not a law to be enacted, not a (court) ruling that can be overturned, not an executive order, but it is a person – Jesus Christ.”

Father Riffle was the homilist at the D.C. Armory Mass, and Cardinal Daniel N. DiNardo of Galveston-Houston, chairman of the U.S. bishops’ Committee on Pro-Life Activities, was the principal celebrant.

Cardinal DiNardo, noting that the liturgy “is one of joy, but one of intense focus,” called on young people to “ready the way of the Lord who comes as the God of life.”

For 15 years, the Archdiocese of Washington has sponsored a youth rally and Mass on the morning of the annual March for Life. As more and more marchers over the years sought to attend Mass before the march, additional Masses have been offered at parishes near the March for Life route.

“Some people would say that the church is old news,” Father Riffle told pro-lifers in the nearly packed armory. “Look around; I say the church is alive.”

Pointing to the almost 28,000 young people at both the D.C. Armory and the Verizon Center events, Father Riffle said there are also “hundreds of thousands of other Catholics” around the country who were praying for an end to abortion to mark the day when “the highest court legalized the destruction of human life.”

In a homily frequently interrupted by applause, he called young people to daily prayer, regular Mass attendance, frequent reception of the sacrament of reconciliation and more involvement in parish activities. “If you want, as a Catholic, to be pro-life, you must be pro-Jesus Christ,” he said.

Young people – some wearing sweatshirts that said, “Thanks Mom,” “I Survived Roe vs. Wade,” “Everyone Deserves a Birthday” and “Abortion is Mean” – began arriving at the D.C. Armory in the pre-dawn darkness. Pro-lifers came to the armory from as far away as New Jersey, New York, Ohio, Connecticut, Wisconsin, Pennsylvania, Illinois, Tennessee and Minnesota.

Spencer Witt and Abby Guenther, eighth-graders at St. Elizabeth of Hungary School in Pittsburgh, joined hundreds of others from their parish and school to attend the armory rally. The group left Pittsburgh, they said, at 1 a.m. to attend the rally and Mass and to march for life.

“We are pro-life, and we’re here to be with others to stand up for life,” Guenther said.

For Witt, getting up early and enduring a long bus ride is “how we say every life deserves a chance.”

“The Supreme Court must overturn this (Roe v. Wade) decision,” he said. “They may not hear my voice saying this, but when it is raised with thousands of others, they will hear us.”

During the Mass, a letter was read from Cardinal Tarcisio Bertone, the Vatican’s secretary of state.

Calling the rally and Mass for life “an outstanding annual witness to the Gospel of Life,” Cardinal Bertone said the young participants in the event were “contributing in no small measure to the construction of a more inclusive, compassionate and just society.”