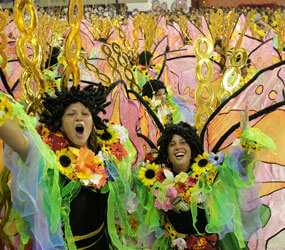 SAO PAULO, Brazil – Tens of thousands of Brazilian Catholics did something different during the four days of Carnival. While their counterparts danced in the streets to the latest samba rhythm, these Catholics attended spiritual retreats.

Hundreds of thousands of Brazilians traditionally participate in the four-day, 24-hour Carnival parties that end as Lent begins on Ash Wednesday – Feb. 17 this year.

As part of a growing trend, this year hundreds of dioceses and Christian associations organized alternative activities that included prayer, music, reflection – and a little dancing.

The number of people attending these retreats has grown significantly during the last few years, and in some areas the retreats have become a tradition for those who want to a different Carnival experience.

Cancao Nova (New Song) Catholic Community, a charismatic society and one of the largest Catholic groups in the country, gathered 70,000 people in its 2009 Carnival retreat in the interior of Sao Paulo state. This year organizers expected more than 60,000, and thousands more followed the festivities on the Internet.

Even Rio de Janeiro, with its world-famous samba parade, offered Catholics alternatives to the Carnival. The Archdiocese of Rio de Janeiro offered eight retreats on the outskirts of the city.