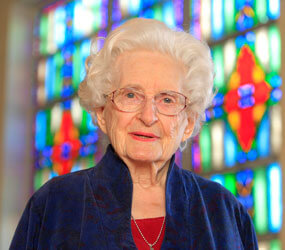 WASHINGTON – Tens of thousands of new Catholics, including an 89-year-old former atheist, will join the church at the Easter Vigil, April 3.

Those seeking baptism, called catechumens, and those already baptized who will be brought into full communion with the Catholic Church, called candidates, have reached the church through a variety of paths. Some have been led by family and friends, while others were motivated by powerful or painful personal experiences.

Jean Henry of Easton, was raised a Methodist and “drifted” into the Episcopal Church, but rejected Christianity more than four decades ago after a major spat in the women’s guild.

“I tried to heal it but I could not,” Henry told The Dialog, newspaper of the Diocese of Wilmington, Del., which includes Maryland’s Eastern Shore. “I thought I had a good, strong faith, but it was too shallow.”

She reached that point shortly before she turned 89 last year. But she also found hope and new life through what she considers “an intervention by God.”

“It was as if all of this atheism was gathered up on both shoulders as if it were a loose garment, and it simply fell onto the floor,” recalled Henry, who will become Catholic at Ss. Peter and Paul Church in Easton. “I sort of figuratively stepped out of it. Since that garment of atheism fell off of me, I have never thought of it, questioned it, had one argument in my head about it.”

As she was preparing to become Catholic, Henry said she believes “the true story is the strength and persistence of God’s faith. I was in his arms all the time, but I was too stupid, too stubborn, too focused to realize that was always there, every minute.”

Now she realizes all she has to do is accept God’s love.

“There’s not much fuss or feathers here because I feel I’m home,” she said.

Across the country in Portland, Ore., Brad Wright, a 42-year-old teacher, was brought to the Catholic faith by substituting in Catholic school classrooms. When he saw students going to Mass and really enjoying it, he decided he wanted that for himself.

“It’s the community,” said Wright, who will be baptized at Christ the King Parish in Milwaukie.

Karl Hellberg, a 41-year-old special agent with the National Marine Fisheries Service, is another of the approximately 900 people joining the church this year in the Portland Archdiocese.

“I feel like I have (been) guided by divine providence through my life, through all the things that happened to me,” said Hellberg, who will become Catholic at St. Mary, Star of the Sea Parish in Astoria.

According to the 2010 edition of a yearbook published by the National Council of Churches, in the United States and Canada membership numbers have gone up 1.49 percent for the Catholic Church – the country’s largest denomination with more than 68 million members.

This vitality is especially notable in the South and Southwest of the United States.

The Archdiocese of Atlanta reported that more than 1,800 people will join the Catholic Church at Easter. This is the largest group of new Catholics registered in Atlanta in any year on record. Archbishop Wilton D. Gregory of Atlanta presided over the Rite of Election and Call to Continued Conversion, when catechumens and candidates are formally presented to the local bishop, at a ceremony conducted in 11 languages at the Atlanta Civic Center.

The nation’s largest archdiocese, Los Angeles, reported that nearly 2,400 catechumens and candidates will be received into the church on Easter. The Archdiocese of Seattle will welcome 682 catechumens and 479 candidates, for a total of 1,161 people.

In the Diocese of Arlington, Va., an estimated 1,100 people will be brought into the church. The Archdiocese of Washington, which includes the District of Columbia and part of Maryland, will receive approximately 1,150 people, as well 18 students from St. Augustine School, the oldest African-American school in the district.

The Archdiocese of Baltimore will welcome 1,081 new members.

Definite numbers won’t be known until the fall parish censuses are completed. Although most catechumens and candidates are formally received into the church at Easter, some may join the church at other times during the year.

“When you make new members, it’s a witness to the whole church,” said Providence Sister Jeremy Gallet, director of worship for the Portland Archdiocese and organizer of the rites of election. She added that those joining the church “realize how much bigger this is than themselves.”