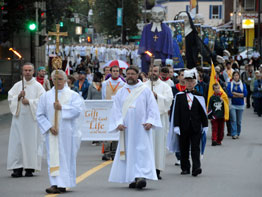 QUEBEC CITY – Nearly 25,000 Catholics from around the world poured through the narrow streets of Quebec City, accompanying the Eucharist in an outpouring of religious fervor absent from this city for at least half a century.

The June 19 procession was one of the highlights of the 49th International Eucharistic Congress June 15-22. The Eucharist, held in an oversized modern monstrance, was driven through the streets on a platform pulled by a truck. Riding with the monstrance were Slovakian Cardinal Jozef Tomko, Pope Benedict XVI’s representative to the congress; Quebec Cardinal Marc Ouellet; and Cardinal Theodore-Adrien Sarr of Dakar, Senegal.

Jean Audet watched the procession with his 34-year-old son, Louis.

“It’s very old, it reminds me of my young time,” said the elder Audet, who is no longer a practicing Catholic.

He explained that when he was young the English Canadians were Protestant and the French Canadians were Catholic; the young men were embarrassed when their girlfriends knelt on the sidewalk during eucharistic processions back then.

Though once the most devoutly Catholic part of Canada, Quebec society abandoned the church in droves in the 1960s during a tumultuous period of social change. Today roughly 10 percent of Catholics still attend Mass, though symbols and saints’ names for streets and villages constantly remind the province’s residents of their religious past.

The presence of the Eucharist – surrounded by cardinals, bishops and priests – at the end of the nearly milelong crowd gave the procession a solemn finish. While many onlookers stared curiously at the passing sight, occasionally a few would fall to their knees as the Eucharist moved past.

Meanwhile, near the front of the line there was a more festive atmosphere in which hundreds of young people mixed among their elders. The parade started with a fourth-degree Knights of Columbus honor guard, followed by the Ark of the New Covenant, a large wooden box carved in the shape of the ark and covered with icons. This ark had spent the last two years crisscrossing Canada to build involvement in the congress among Catholic youths.

Cheers arose each time one of the giants would bow or wave at the crowd.

Jordan Clark, 15, of Kensington, Prince Edward Island, waved his province’s flag as he walked in the procession.

“I love being with people who want to celebrate our faith,” he said. “I’ve felt a strong bond with religious people in this congress who have come from all over the world.”

Twenty-three-year-old Cody Gabrielson of Winnipeg, Manitoba, carried a conga strapped over his shoulder as he walked. He said he was drawn to the congress by a “deep love for the Eucharist.”

The procession, he added, gave him a “deeper understanding of how unified we are.”

Some elderly women waved flags from their windows along the more than three-mile route.
Outside three homes for the aged, residents, some in wheelchairs, also watched the procession.

The Eucharist made two stops along the way, for a short prayer and adoration service at St. Francois d’Assise and a liturgy at St. Roch. Both are old historic churches in the city, while St. Roch, the city’s largest church, has a reputation for service to the poor and sick.

At St. Roch, the Eucharist was the focus of a liturgy of blessing for the sick.

After St. Roch’s the crowds thinned because the final destination, the Agora, an amphitheater on the waterfront, could only hold 5,000 marchers. Some carried torches; others carried candles.

The rain that had pounded the streets on and off all day held off for most of the procession. A brief shower did nothing to douse the joy. Umbrellas popped up, and many, including some of the priests and bishops, wore the clear plastic raincoats provided in the congress registration knapsack.

Contributing to this story was Deborah Gyapong.