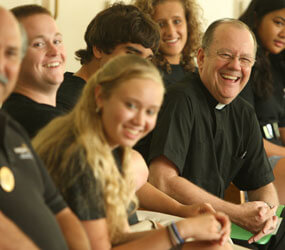 Encircled by 48 teenage attendees of the High School Leadership Institute inside the Monsignor O’Dwyer Retreat House in Sparks July 30, Paulist Father John F. Hurley looked pensive. He walked about a blue cloth that looked like a body of water.

The teenagers, who were five days into the Archdiocese of Baltimore’s youth training retreat, just heard the Gospel message about Jesus asking fishermen to become fishers of men.

Father Hurley, the executive director of the Department of Evangelization, asked during his prayer service reflection: “How many of you like to go fishing?”

Half of the teens in room raised their hands, while the other half admitted they hated it.

“This Gospel is about invitation,” he said as he grabbed about ten teenagers by the hand and asked them to sit by the blue cloth. “One of the greatest things about fishing is not everyone likes it. Yet, when Jesus called each one of the disciples, he looked at the group as one. The thing is, despite their fears … he saw something in each of them.”

Seventeen-year-olds Kelly Aquilla, Josh Twery and Kevin Balhoff were among the teens that got into the proverbial evangelization boat by taking part in High LI, which has been in existence since the late 1970s. The Division of Youth and Young Adult Ministry program ran from July 25 to July 31, drawing young people sent by parishes or high schools. They were broken up into the three leadership tracks: Source and Summit, Emmaus and Acts 29.

Aquilla, a parishioner of Our Lady of Mount Carmel, was in the Source and Summit, which trains for liturgical roles in a parish or school. It pulled her out of her comfort zone.

“You have to find the preface, all the songs and give the priest what his homily’s going to be about,” Aquilla said. “You have to read the readings and make evaluations about those readings. There are lots of tiny details I didn’t know about.”

Emmaus member Twery, a parishioner of Sacred Heart in Glyndon, learned about peer ministers in his track.

“I thought that was just a title for kids who’ve done confirmation and come back and help out again,” he said. “It takes on a whole new meaning for me. A peer minister walks on people’s faith journeys with them, not in front or behind, but beside. We’re going through the same things.”

Kevin Balhoff, of St. Louis in Clarksville, found parish and school leadership lessons in Act 29 to be inspirational.

“The people who had been to High LI before were leaders that I really respect,” Balhoff said. “I wasn’t entirely sure what to expect, other than it was supposed to give me the confidence I need to be a leader in our groups. It was what I got.”

Father Hurley met the teens as they were approaching the final hours of High LI. Though they were exhausted, he saw great promise.