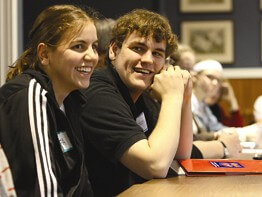 Catholic teens from across the Archdiocese of Baltimore had plenty of weighty questions for archdiocesan leaders during a Jan. 14 youth forum sponsored by the Archdiocese Youth Advisory Council.

Meeting at Mount de Sales Academy in Catonsville, more than 60 young people queried two auxiliary bishops, archdiocesan lay leaders and a school principal on the differences between liberal and conservative Catholics, the role of women in the church, being prolife and understanding homosexuality.

The teens developed the questions themselves and participated in an open forum and small-group discussions in a dialogue designed to bridge the generation gap.

Several students questioned why Pope John Paul II closed the door to the discussion of the ordination of women in 1994 when he declared that the church has no authority to confer priestly ordination on women.

Bishop Denis J. Madden, urban vicar, suggested that the issue was becoming too divisive in recent years and threatened to tear the church apart.

“Perhaps it was the right move at this time as long as you don’t say you can’t discuss other women’s issues in the church,” said Bishop Madden, noting that the church encourages dialogue on the broader issues related to women’s roles in leadership.

Although the church hierarchy has historically been all male, Bishop Madden said new possibilities for women leadership have emerged. The bishop said women now serve as chancellors of some dioceses – a prestigious position that had previously been reserved for priests who might become future bishops, he said.

As a young priest, Bishop Madden said he worked at the University of Maryland School of Medicine in Baltimore, where all his superiors were women.

“I felt it’s a matter of talent and abilities as opposed to sex,” he said.

When a young man asked why the church “can’t accept homosexuals as part of the church,” Bishop W. Francis Malooly, western vicar, said the church does welcome gays and lesbians.

The rights of homosexuals must be respected, the bishop said, but that does not mean the church should recognize gay marriage.

When asked about “liberal” and “conservative” labels, Sister Elizabeth Anne Allen, O.P., principal of Mount de Sales, said it’s often the expression of the faith that is traditional or progressive – not the faith itself.

“The church’s task is to hand down the message of Jesus,” she said. “How it’s applied is different in the 20th century versus the first century.”

Sister Elizabeth Anne added that the church “does the will of God, not our will.”

Stephanie Roberts, pastoral associate and assistant director of campus ministry at Mount St. Mary’s University, Emmitsburg, pointed out that Christ’s followers have had “liberal” versus “conservative” debates since the founding of Christianity.

Ruth Puls, archdiocesan director of ministry formation and development, told the young participants she was impressed by their respectfulness and sincerity.

“You want to know what the church’s teachings are,” she said.

Added Ms. Roberts: “You show a lot of courage and passion. This is a group that knows there is value in diversity.”

Philip Guerieri, a 16-year-old parishioner and peer minister at St. Isaac Jogues, Carney, said the event showed how young people and adults can come together.

“I was amazed at the insights the adults brought to the table and how they appealed to the youth,” he said.