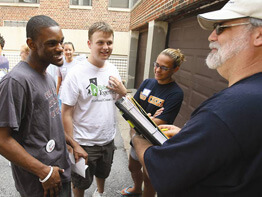 Twenty-one youths from across the archdiocese sat and listened in awe, July 11, as Michael Austin told the story of how, as an innocent man, he was convicted of murder and armed robbery.

The crowd of young people participating in Justice Action Week July 8-13, joined peer leaders and chaperones at Our Lady of Pompei, Highlandtown, to listen to Mr. Austin talk about being convicted of a crime he didn’t commit, how he made the most of his 26 years in jail and how he has forgiven those who wrongfully put him there.

“No matter your circumstance, you can overcome it,” said Mr. Austin, who while in prison acquired his GED and took college courses. “Prison is a state of mind.”

Mr. Austin was just one of many people the youths spoke to while “living” in Baltimore City for the week as part of the JAW program sponsored by the Division of Youth and Young Adult Ministry.

Brendan Young, 16, said during a walking tour of the area around Our Lady of Pompei, the young people stopped by different houses to speak to the people in the community. He met people of Hispanic descent, a family from the Congo and an elderly woman who grew up in the neighborhood.

“They have given us many opportunities to step out of what we are use to,” said the parishioner of St. Margaret, Bel Air. “The experiences here have been amazing. It’s life-changing.”

Each day started with a different theme including hospitality, solidarity, human dignity and others. The youths were taken to a soup kitchen to see not only the people coming in but to understand what it takes to run the kitchen. Kristen Johnson, a student at Maryvale Preparatory School, Brooklandville, said that even though she is Baptist, she hopes to bring Catholic social teachings into her faith and confirm her beliefs.

She hopes to “change the world” and use Mother Teresa as her role model.

Pat Terranova, a recent graduate of Mount St. Joseph high School, Irvington, has been attending JAW for the last three years, once as a participant and now as an “intern.” He said it is important for the youths to see the many different faces that make up Baltimore City. He hopes they leave with a better perspective and idea of what they can do to help their fellow man.

“It is an eye-opener. You get the real Baltimore with real people with real issues,” said Pat, 17. ‘This program gives youth hope and insight into how the world is and how it could be.”

Jessica Phelan, 16, has met so many wonderful people, people she wouldn’t have met without this experience, she said. She will always remember sitting in a homeless shelter with a young child playing video games and witnessing the smile and joy that shown on his face.

“It’s important for us to bring joy to people’s lives,” said the parishioner of Church of the Resurrection, Ellicott City. “You don’t have to do something great to make a difference in someone’s life.”