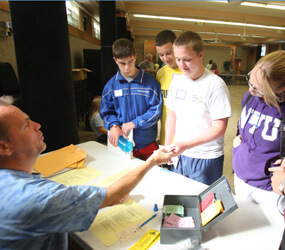 Corrine Molz was like many idealistic teenagers who said they wanted to change the world, but never had a face for their noble mission.

Thanks to the Archdiocese of Baltimore-sponsored Justice Action Week, the 17-year-old Our Lady of the Fields, Millersville, parishioner now does.

She joined 31 teenagers from the Archdioceses of Baltimore and Washington in the annual city immersion project. Participants visited Baltimore City agencies and neighborhoods and worked with people dealing with hunger, immigration, drug addiction and poverty, among other issues.

Like the other 30 participants, Corrine found herself transformed by the experience that spanned July 12-17.

“Before, I was like, ‘I want to help people,’ ” Corrine said. “But, I never got the people part. It’s just getting to know who they are, what they’re going through.”

The teenagers worked in, among other things, soup kitchens and visited You Are Never Alone, a refuge for women and girls ensnared in human trafficking

Ted Miles, Justice Action Week’s program director, said teenagers took away a bead from each site they visited to remember people they encountered.

“We’re careful to select agencies that give insight into the vast array of issues that not only affect Baltimore, but all of humanity,” Miles said.

The teens slept at New All Saints, Liberty Heights, and participated in a simulation project in the parish hall. Given a series of roles that reflected the socio-economic hardships people face daily, the youths found themselves emotionally stirred.

Phil Liotta, 16, of St. Elizabeth Catholic Church in Rockville, played a Hispanic father illegally residing in the city forced to split up his family so they could stay in the United States.

“There were a couple of times where I really got angry,” Liotta said. “It definitely made me think about immigration more and how hard it is to become a citizen.”

Kristin Witte, the director for pastoral care in the archdiocese’s division of youth and young adult ministry, said the teens realize they are stepping into a larger world.

“They’ve now been formed in a way that they’re going to see service as part of who they are, instead of seeing it as charity,” Witte said. “They now see themselves as part of a larger community, and they’re willing to work and fight for the dignity of other people.”

Witte said the week was the embodiment of Pope Benedict XVI’s new encyclical, Caritas in Veritate.

“Justice Action Week is an opportunity for the young people to see their place in the world and locally, and how that’ll affect discipleship,” Witte said.