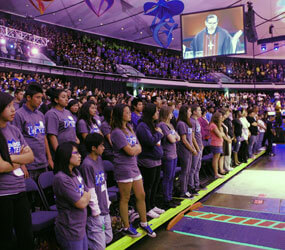 ANAHEIM, Calif. – It is common to see relaxed walkers at any given time and day on Harbor Boulevard near Disneyland in Anaheim, but the picture changed early March 18 during the annual Religious Education Congress Youth Day.

The cross streets surrounding the Anaheim Convention Center were busy with groups of 20, 30, 50 or more teenagers and their chaperones, making noise and wearing colorful T-shirts, and busloads more from across the country continued to join them throughout the early morning.

By 8:30 a.m. the arena at the center was at full capacity – 11,000 – but more teenagers with their chaperones were still arriving. Another 4,860 people were sent to Hall B – another section of the convention center.

With contemporary Christian singers, musicians and artists, and energetic speakers, the youth day set the tone for the Los Angeles archdiocesan congress that followed March 19-21.

During a mid-morning liturgy in the arena, Los Angeles Cardinal Roger M. Mahony commended students Samantha Perez and Daniel Rafferty, who shared their stories about finding God in the midst of their sufferings.

Perez’s father was in jail for a time and she regretted he was not in her life. her involvement in church helped her come to accept her stepfather. Rafferty’s parents divorced when he was 5 and he longed for his father’s presence, he said, when he and his mother and brothers went to activities. But he realized, he said, Jesus had been there for him the whole time.

Keynote speaker Pam Stenzel talked about her experience working at pregnancy centers in Chicago and Minneapolis for nine years and how she often heard teenage girls say, “If someone would have told me, I would have made a different choice.”

“Teenage girls were making decisions about sex with absolutely no idea of what the consequences of that choice would be,” the psychologist told the young audience in the arena. “Your parents can’t make choices for you. My goal is that you don’t ever have to tell your physician, your parent, your husband or wife, ‘Well, nobody told me.’“

Stenzel told her listeners that sex is a precious gift from God, but cautioned them not to take it lightly.

In Hall B, Father Tony Ricard, pastor of Our Lady Star of the Sea Church in the Archdiocese of New Orleans, told the crowd that they were given special gifts when they were baptized.

“Too many kids don’t know what their gifts are, and I tell you that confirmation is an opportunity to stand up and say, ‘I’ve got the gifts.’ But too many see it as a graduation from religion, too many think it’s emancipation from church. They think it’s over, but it’s not.”

The priest said the sacrament of confirmation is “a serious step in our church, it is an obligation to be a true follower of Christ.”

Among the diverse audience was a 15-year-old girl whose parents gave her away to her godparents when she was 11 months old; a confirmation student who has been suffering peer pressure to attend parties where drinking and using drugs is the norm; and a boy who was forced by his parents to attend the congress youth day and was hiding behind the hood of his jacket.

Not all of the participants were Catholic, but there was common ground. In interviews with The Tidings, newspaper of the Los Angeles Archdiocese, many admitted to having made some bad choices. They also said they needed to take time to think about their decisions and seek help from God.

“Father Tony made us realize that God is there for us,” said Nadia Torres, a student from Sacred Heart High School in Los Angeles. She said she was confident she could turn to God “if anything goes wrong.”

“God is everywhere and he will help you through everything,” said Safiya al-Sarraf, a Muslim who attends Sierra Madre’s all-girls Alverno High School.

“The whole experience is not a message only for Catholics,” said Lana el-Farra, her Muslim friend and Alverno classmate. “It is a universal message and I can also get something out of it.”

Kimberly Ruano, a Sacred Heart ninth-grader, also felt she would she could get plenty of support from fellow participants. “I feel like this is one big family,” she said.