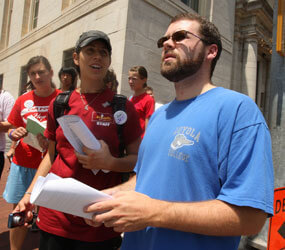 Before he departed for potentially five years of studies at the Pontifical North American College in Rome July 18, Seminarian Josh Laws had one last thing he wanted to do in the Archdiocese of Baltimore: be a staff member in Justice Action Week.

“I kind of look at it as the church at its best and really Baltimore at its best,” said Laws, who grew up a parishioner of St. Stephen in Bradshaw and is an alumni and past staffer of JAW. “I wanted to spend time with Baltimore and the local church.”

Laws saw 22 eager teenagers during the recent edition of JAW, which took place in Baltimore City from July 10 to July 16.

“Part of the purpose of whole program is to make the issues impacting Baltimore and our whole world more personal because there’s always a human story,” Miles said.

Participants visited Catholic Relief Services and organizations like Hezekiah Movement, which help those recovering from addiction. They heard from the formerly imprisoned and those working with women trying to escape prostitution and trafficking. They also met people with physical disabilities.

During one role-playing activity, participants came to understand the frustrations of many living in the city. After they visited CRS, the teens were exposed to eye-opening locations like Lexington Market.

Danielle Wilson, a student of Mount de Sales Academy in Catonsville and parishioner of Our Lady of the Fields in Millersville, said acting selflessly can lead to changes.

“I knew these problems existed, but didn’t know what I could do to help,” she said. “This has really forced me to get out of my comfort zone and find out what I can do to help the people that don’t have the luxuries I do.”

For Laws, his 2003 JAW experience was a revelation. He had just graduated from Loyola Blakefield and was bound for Loyola University Maryland, contemplating the Jesuit priesthood and political interests.

“You learn that poverty isn’t so much a statistic as it is a reality for people you get to know,” Laws said. “You really get to know people who are struggling with addiction, injustice and homelessness. I was compelled to do something as a response to that.”

Carlos Amador, who was featured in a Catholic Review story along with his mother in May, was a JAW participant. His mother, Blanca De La O, is facing deportation to El Salvador this month after years of raising her family in Baltimore and could be split from her children.

The parishioner of Our Lady of Pompei and student of Cristo Rey Jesuit High School was skeptical.

“I thought it was going to be boring, but now it’s the most amazing thing that could happen to me,” he said. “I’ve never felt this before.”

He wants to show parish friends what he experienced and get them involved.

Amador shared his own emotional family experience with fellow teens.

“It’s not possible to think something like that is OK or just,” Wilson said, “especially because we’re on Justice Action Week.”