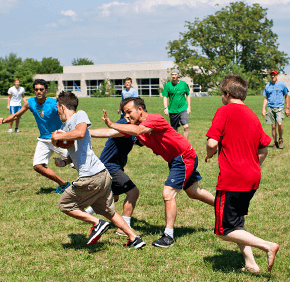 By Elizabeth Lowe
elowe@CatholicReview.org
Twitter: @ReviewLowe
EMMITSBURG – Father Jesse L. Bolger whipped out his classical guitar and began strumming it as he finished telling 45 high school-aged boys July 24 he hasn’t abandoned his pastimes since his ordination to the priesthood in 2007.
“The idea of mind, body and soul for all of us is so important,” said Father Bolger, administrator of St. Clare Parish in Essex.
Father Bolger addressed the teens at the Archdiocese of Baltimore’s first Quo Vadis vocations camp, an overnight camp for young men held July 21-24 at Mount St. Mary’s University. Nearly all participants were from the Archdiocese of Baltimore, with two hailing from the Archdiocese of Washington.
“Quo Vadis” means “Where are you going?”
To view a slideshow from the event, navigate the arrows below.
Interested in purchasing a photo? Click here.
The camp used World Youth Day’s theme, “Go and make disciples of all nations.” The global event is July 23-28 in Rio de Janeiro.
Father Bolger also discussed discerning a call to the priesthood.
“If you open yourself up to formation, if you give yourself to the program, you will be transformed by grace and study,” he said. “People are looking for good shepherds to lead the church, to make Jesus present. What an awesome privilege it is. This is why I became a priest and I love being a priest.”
James Downs, a 17-year-old parishioner of St. John, Westminster, said participating in the camp made him aware of being open to whatever God is calling him to do, “because that’s where you’ll be the happiest.”
“God calls everyone to a vocation,” he said.
During the camp, the teens played dodgeball, soccer and hiked, in addition to attending morning prayer and daily Mass, learning how to discern God’s plan and exploring marriage and the priesthood as vocations.
During the closing session, Father Michael A. DeAscanis, vocations director for the archdiocese, discussed next steps. He instructed the teens to make a plan that nurtures their prayer life.
“What’s a commitment you can make? Something feasible, something realistic to improve your prayer life,” he said. “When we go on retreat, it’s important to make some commitments.”
Father DeAscanis told the Catholic Review the camp was designed for young men who say they are open to the possibility of the priesthood.
“These are four days to remind young men God has a plan for their life,” he said, adding that it’s a sign of hope that so many youths participated.
“I encourage someone to come to a camp like this to find out where you’re going,” said Clayton Holdcroft, 15, a parishioner of St. John the Evangelist, Frederick. “Quo vadis.”
Also see:
Labor and delivery nurse offers advice for all new moms, royal or not
Teen girls learn about discernment at vocations camp
PrevNext