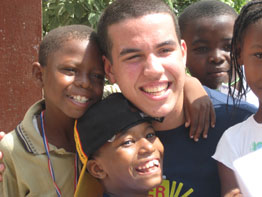 A circle of gray clay rests on the kitchen table in the Hassan household, not exactly an impressive souvenir from Haiti, but a memento of the slight food supply in the Caribbean nation.

As they think of fellow humans without access to America’s cornucopia, the Hassan family is reminded of their nutritional luxuries. The clay cake – té – is what the poorest Haitians are forced to eat when real food is unavailable – which is regularly. Containing almost no dietary value, its dirt-like content is camouflaged in shortening and salt and consumed merely to remove hunger pangs. Village women make and sell té at local markets for pennies apiece.

Patrick Hassan, 16, returned in July from St. Marc, Haiti, with a bag of the cakes. He wanted his family and others to view a constant reminder of their blessings.

The noticeable lack of food wasn’t the only theme to strike Patrick so intensely on the mission trip planned through the archdiocese’s Baltimore-Haiti Outreach Project.

Returning spiritually and emotionally refreshed, the teen discovered how the children at Le Bon Samaritains (The Good Samaritans) school “made me better. They are so rich in spirit … it’s amazing they can have that little and be so rich.”

The school was the focal point for Patrick and three other teens as Deacon Rodrigue Mortel, M.D., director, and Agnes Supernavage, project assistant, led the journey.

“It is important for youth to participate in mission trips,” said Ms. Supernavage, “to challenge their ‘comfort zone’ by exposing them to the reality of poverty. They become spokespeople for the poor.”

The small group oversaw a summer camp for fourth-graders in which the teens planned lessons beforehand.

A senior at Old Mill High School, Patrick seems clear about his life’s goals – to become a diplomat and work for a non-governmental organization. He plans to major in international affairs in college.

“That what I want to do when I grow up,” said Patrick, an active parishioner at St. Bernadette, Severn, who said the trip to Haiti taught him much about humanity.

“I don’t think he had any idea how much the trip would affect him,” said Ron Hassan, Patrick’s dad. “He left a boy and returned as a young man. He now has direction and focus like I didn’t see before.”

Months before Christmas, Patrick announced “no presents” to his parents, asking them to instead donate money to Haiti.

“I could not go back to my everyday life,” Patrick said, “because it seemed so stupid … all the high school drama … there are bigger things to worry about.”

Without television, iPods, and cell phones to distract Haitian children, Patrick noticed how deeply they were in tune with God.

“He has repeatedly told people he could not believe their focus when they prayed,” said Ron Hassan. “He said they ‘got in the zone and nothing could get in their way.’”

At a time when some of his peers are leaving the church, Patrick has found a new dimension to his faith and feels the call to service.

“The Haitians taught me,” said Patrick, “that the richest life is not one of material possessions but a life with unfaltering faith in God.”