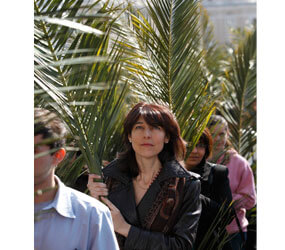 VATICAN CITY – Celebrating Palm Sunday Mass at the Vatican, Pope Benedict XVI warned that technological progress must not lead people to think they can “become God.”

About 50,000 faithful waved olive branches and palm fronds in St. Peter’s Square April 17 at the start of the liturgy that commemorated Christ’s triumphal entry into Jerusalem five days before his crucifixion.

The German pontiff, who celebrated his 84th birthday the day before, joined a procession that led to the Egyptian obelisk in the center of the square. He asked listeners to continue to prepare for Easter through penitence and acts of charity.

Holding a braided palm garland, he then rode in a jeep to the main altar for the two-and-a-half-hour Mass. It was the beginning of Holy Week, the busiest period of the year for the pope, with a demanding schedule of public appearances.

In his homily, Pope Benedict said the Palm Sunday procession must be understood as more than a “quaint custom.” It represents the spiritual ascent that all Christians are called to make, a journey “along the high road that leads to the living God,” he said.

Such an ascent is impossible without God’s help, he said, although men and women have long attempted to “attain the heights of God by their own powers.” All the inventions of the human spirit are ultimately an effort to become independent and completely free – but without God, this effort is doomed to failure, he said.

“Mankind has managed to accomplish so many things: We can fly. We can see, hear and speak to one another from the farthest ends of the earth,” he said.

“And yet the force of gravity which draws us down is powerful. With the increase of our abilities there has been an increase not only of good. Our possibilities for evil have increased and appear like menacing storms above history,” he said.

The pope said that despite progress, human limitations have been evident in recent disasters that “have caused so much suffering for humanity.”

The spiritual ascent to which Christians are called has some concrete elements, including purity, honesty and faith in God, he said.

“The great achievements of technology are liberating and contribute to the progress of mankind only if they are joined to these attitudes – if our hands become clean and our hearts pure, if we seek truth, if we seek God and let ourselves be touched and challenged by his love,” he said.

In the end, he said, a spiritual ascent is effective only if people humbly acknowledge that they need God and “abandon the pride of wanting to become God.”

At the end of the Mass, the pope expressed greetings in seven languages to the thousands of young people in the square and said he was looking forward to the World Youth Day celebration in Madrid next August. The youths serenaded the pope with an abbreviated version of “Happy Birthday” in Italian.