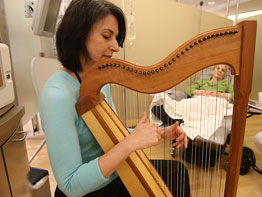 Babies cry less when they hear the sound of the harp.

That’s not a mothering tip but an observation of nurses in the Neonatal Intensive Care Unit at Mercy Medical Center, Baltimore, on days when harpist Cathy Maglaras wheels in her 12-pound Celtic instrument to strum tenderly in the company of incubated preemies.

There’s something very special about the 33-string harp – it has a healing effect, believes Ms. Maglaras, who also feels its relaxing result.

“It’s the beauty of the live music, the vibrations of the strings,” said the certified music practitioner who plays five hours a week at Mercy through a grant-funded Therapeutic Healing Music Program. She also plays two hours a month in the hospice at Stella Maris, Timonium, and teaches music at Cockeysville Middle School.

The preemies may not be able to explain the soothing effects of the harp, but their adult caretakers can. They admit to the harpist, “We’re nicer to each other when you’re here.”

Playing for babies, the critically or chronically ill, near-death patients, those being discharged or cancer patients in outpatient chemo treatment, Ms. Maglaras times her strokes on the strings to correlate with heart rhythms and irregular or normal breathing.

As she strums, the key or tempo is adjusted as she watches a person’s facial muscles. She also listens to verbal responses to the simple Irish and Scottish music, and she stops if the patient has had enough. She wants patients in control and relaxed during her musical massage.

“You don’t want a lot of stimulation,” said the musician, especially for someone about to die who already may feel anxious. The music should “give them a greater feeling of peace.”

Perhaps what it brings to the listener’s mind is a fluid harp to harp transition, from the music in the hospital to the celestial music in heaven.

“I had a gentleman look at me one day and say, ‘That’s the most peace I’ve had in years,’” she remembered.

Therapeutic music is not entertainment or a concert, said the black-haired harpist who instructs patients not to applause. “I tell them to just close their eyes and receive.”

Mercy’s therapeutic music program falls under its pastoral care department and is unlike “music therapy,” used in different scenarios where patients are actively involved, similar to physical therapy.

Reclining in a hospital chair since 9 a.m. that morning, a white blanket covering her legs, Ilene Vaught took off her glasses, set them in her lap and listened to the harp. Her salt-and-pepper hair, which will fall out again, was cropped short and her makeup was intact.

Luther Vaught, her husband of 47 years, sat by her side during another day of chemotherapy.

“I just took a trip to Ireland!” said Mrs. Vaught after the harpist’s first selection.

The Perryville couple has dealt with Mrs. Vaught’s ovarian cancer for 13 straight months at Mercy, during which time they have heard Ms. Maglaras play twice before.

“Makes you think of spring and green,” said the chemo patient, “and where you’d like to be instead of here.”