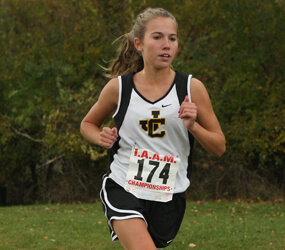 It’s a good thing that Elizabeth Tauber is one of the state’s premier cross country runners.

The faster she goes, the more time she has to give to John Carroll and other institutions in Harford County.

The Interscholastic Athletic Association of Maryland was to hold its championship meet Oct. 28. Tauber, a 16-year-old junior, was seeking to make it two titles in a row.

She’s won major invitational meets in Bel Air and Emmitsburg this fall. Last spring, Tauber won an IAAM track and field title in the 3,200 meters, where her best is 11 minutes, 28 seconds. She covered the 1,600 in 5:24, and her classroom numbers are equally impressive.

Tauber compiled a 3.8 cumulative grade point average in her first two years of high school. She’s earned membership in the Spanish Honor Society; is on the staff of The Patriot, the school newspaper; and is a member of the Fellowship of Christian Athletes.

When it doesn’t conflict with a race, Tauber spends Saturday mornings as a volunteer at John Archer School, the only public special education school serving students with disabilities in Harford County.

“Last year I was at a sleepover at a friend’s house,” Elizabeth said. “Her brother has autism, and we went to John Archer the next morning to help out. We have motor skills clinics, get the students involved in different activities, get them moving.”

That experience has piqued her interest in becoming a special needs educator. College is still two years off, but it seems like only yesterday that she had to decide between running cross country for John Carroll or playing soccer.

She chose to follow in her father’s athletic footsteps, as Steve Tauber was an All-Metro runner for Archbishop Curley in 1981.

“Steve got out of Curley the same year I got there,” said John Carroll coach Rob Torres, himself an All-Metro runner for the Friars. “I’ve known about Elizabeth for a long time.

“She’s a pretty quiet kid, but a fierce competitor. Like a lot of teams, we finish practice with a staggered run, the fastest runner going off last. She will work to catch everyone.”