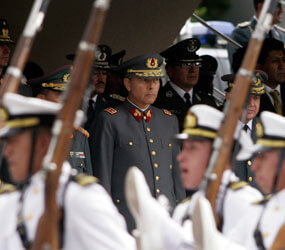 LIMA, Peru – As Latin American Catholics celebrated the start of the new year with World Peace Day, their countries’ leaders seemed to be preparing for war.

Spending on arms in the region ballooned from $24 billion in 2003 to $47 billion in 2008. From Venezuela to Brazil to Chile, countries were purchasing tanks, fighter jets and other military equipment better suited to waging war on their neighbors than fighting domestic threats, such as drug trafficking and organized crime.

An agreement between the United States and Colombia to allow U.S. military personnel to use seven bases in the Andean nation further exacerbated tensions in the region.

Catholic bishops in at least two countries have warned about the imminent threat of drug-related violence, but little has been said about the military buildup.

Peru has called for a halt to what it terms an arms race in South America, even while it negotiates the purchase of tanks from China.

Some analysts say “arms race” is too simple a term for the weapons purchases in the region.

“An arms race implies that everybody is buying weapons because they want to protect themselves from each other,” said Michael Shifter, vice president for policy at the nonprofit Inter-American Dialogue in Washington and a professor at Georgetown University. But the region’s leaders are currently buying weapons for various reasons.

After economic crises in the 1980s and 1990s, many Latin American countries saw unprecedented growth in the past decade and can afford to replace obsolete equipment, said Adam Isacson of the Washington-based Center for International Policy.

Nevertheless, Isacson notes that most of the weapons being purchased, from tanks to fighter jets to automatic weapons, “are for scenarios of interstate conflict.”

Isacson said as events in the Middle East distracted U.S. attention from Latin America, Brazil has emerged as a regional leader and is trying to position itself as a world power. The country has signed a deal with France that includes the purchase of submarines, including one nuclear-powered vessel, fighter planes, tanks, missiles and radar equipment. Politicians have said the country must protect large offshore oil deposits discovered during the past several years.

Brazilian President Luiz Inacio Lula da Silva also expressed concern over a U.S.-Colombian agreement allowing the United States to use military bases in the Andean country. The deal came after Ecuador refused to renew a contract that allowed U.S. planes to use a military base in Manta, Ecuador, for drug reconnaissance flights.

But the agreement with Colombia goes beyond anti-drug operations.

“The mission is completely broad now,” Isacson said, adding that the “vague language, secrecy and leaks” that marked the signing of the U.S.-Colombia agreement “were the biggest gift you could give” Venezuelan President Hugo Chavez.

Chavez, a constant critic of both U.S. and Colombian military policy, has cited the U.S.-Colombia deal to justify beefing up his country’s arsenal .

In Chile, where the military receives 10 percent of revenue from the state-owned copper mining company, windfall profits have allowed the country, which has the region’s strongest air force, to negotiate purchases of fighter jets and submarines.

The deals sparked criticism from politicians in Peru, which has a long-standing maritime border dispute with its southern neighbor, Chile.

Peruvian President Alan Garcia called on South American countries to avoid an arms race, sending Cabinet members to urge other governments to spend funds to reduce poverty instead of buying weapons. At the same time, Peru is negotiating for the purchase of naval frigates, and in a military parade in December, it showed off new tanks from China.

Even Bolivia, which has one of the region’s lowest military spending rates, is discussing the purchase of military aircraft, leading neighboring Paraguay to also consider increasing its military budget.

With U.S. attention focused more on Iraq and Afghanistan than Latin America, other countries are stepping in to build closer relations with the region, analysts say. Iranian President Mahmoud Ahmadinejad has visited Venezuela, Brazil and Bolivia, and China is striking deals not only to sell military hardware, but also to prospect for minerals and oil.

“There’s a geopolitical interest,” Shifter said of the attention from China, Iraq and Russia. “They’re projecting their influence with regard to the United States. They’re trying to show Washington that they can operate in its backyard.”

Isacson said the U.S. is also paying too little attention to greatest threat of violence in the region, which he said comes from drug trafficking and organized crime.

In 2009, Guatemala’s bishops wrote in a statement, “Our country bleeds day after day” because of the violence of “powerful drug cartels and organized crime gangs who use young people as hired assassins.”

And in Mexico, where the government has called out the military to combat drug cartels, the bishops have said that “drug trafficking, human rights violations and organized crime” undermine human dignity.

While “militarization looks like a shortcut” to attacking drug traffickers, who are linked to irregular armed groups in countries like Colombia and Peru, Isacson said, military and police action must be combined with policy to shore up weak governments and judicial systems.

“I am worried about the next five years in Latin America,” he said. “You’re seeing organized crime taking over governments.” The United States “has to do everything it can to reduce its own demand (for illegal drugs), stop the flow of weapons into the region, and crack down on money laundering.”