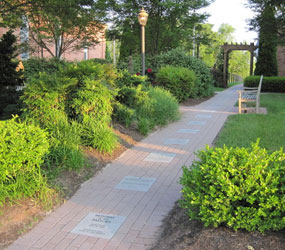 St. Joseph in Taneytown recently established a “Pathway of Pastors” to honor the priests who have led the parish since its 1797 founding. (Courtesy St. Joseph

St. Joseph in Taneytown has had a host of illustrious pastors over the course of its 213-year history.

Father Demetrius A. Gallitzen, the founding pastor, earned the title “Apostle of the Alleghenies” for traveling by horseback over a 250-mile radius to minister to Catholics of the region. The son of Prince Dimitri Alexeivitch Gallitzin, envoy of Catherine the Great of Russia, he is under consideration for sainthood in Rome.

Then there’s Father Francis P. Wagner, a World War II paratrooper, who led St. Joseph from 1959-63. Father Wagner was known as the “people’s priest” who helped erect the school building.

Other pastors included Father Paul F. Dolan, a generous and anonymous donor to the poor, who bought and drove school buses during his 20-year pastorate from 1974-94.

Each of the 21 pastors who have served St. Joseph was honored in a special way when parishioners recently erected an outdoor “Pathway of the Pastors.” The name of each priest was inscribed on a 16” square brick, along with the years of his service at the Carroll County parish and a brief caption describing his ministry.

“It really gives you a sense of where our parish came from and where our parish is today,” said Linda Webster, a parishioner who came up with the pathway idea with her husband, Larry Webster.

“We didn’t just want to have a name on the bricks,” she said. “We wanted to have something of the personality of the priest – something special so people would know the man and not just the title.”

Monsignor Martin Feild, current pastor since 1994 and the first monsignor to lead the small faith community, was honored for his love of “food, flowers, jokes” and for establishing the Trinity Garden, among other accomplishments.

Monsignor Feild said the pathway is a great way to highlight the history of the parish.

“It will outlast a lot of people,” Monsignor Feild said. “A bit of the history is lost if it isn’t in some form where people can see it.”

Larry Webster believes the pathway, established during the Year for Priests, could not have happened at a better time. The Holy Name Society installed the pathway through the courtyard gardens.

“We spaced the bricks 24 inches apart so your eyes are drawn to that specific brick when you approach it,” Webster said. “We watched people along the pathway and they stopped at every single brick like we had hoped.”

Money for the pathway was raised through Lenten fish fries and donations.