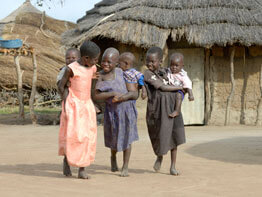 KITGUM, Uganda – Corrina Akongo has harvested sweet potatoes from her own land for the first time in years.

After more than a decade of living in a crowded camp for internally displaced persons, surviving on food donated by the international community, she came home to her ancestral village of Amuca in April just in time to plant. As the new year began, she harvested grass for the roof of a new thatched hut and dug her sweet potatoes from the ground.

“It seems like forever that we’ve been waiting for peace,” she said. “I couldn’t wait to get back home and start my life again.”

After more than two decades of violence, the people of northern Uganda are enjoying a respite from the bloody conflict between the rebel Lord’s Resistance Army and the Ugandan government. Peace talks that began in 2006 in Juba, Sudan, have progressed slowly but steadily, and a small number of the almost 2 million internally displaced people have returned to their ancestral villages.

Father Matthew Ojara, pastor of Christ the King Parish in Kitgum, said the lull in fighting has allowed some people to restart their lives.

“There’s huge psychological relief now. People are relieved to be able to return home, to do some farming, though still on a small scale and not very far from the camps,” he said.

“Most people remain in the camps, though, waiting,” he said. “Their past experience of running for their lives, of being abducted, of girls being raped, of killings and night commuting, all that is still fresh in their minds. They want to see the two sides sign a permanent and lasting peace agreement. Until then, they’ll wait in the camps, which are a sign of their pain and suffering.” For years, thousands of children known as “night commuters” left their rural homes without their parents to sleep in safer urban areas to avoid being kidnapped.

Father Ojara said the years of displacement also have taken their toll on some people’s spirits.

“When you’re unable to go out and dig (your own crops), you’re forced to depend on outside help, and we’re grateful to the world community for assisting our people. But a good percentage of our population was born in the camps. What kind of vision do they have of life? That dependency on outside help has created a kind of syndrome in the people, and some people have become too dependent. But the time will come for them to go home,” he said.

However, Father Ojara said that the people are proud to be independent and do things for themselves.

He recalled that, “last rainy season when people started to go home and work their own fields, if you went to them and offered money and said, ‘Come and dig in my field, I will pay you,’ they’d say, ‘No, I’ll go and dig my own garden first, and plant it, and if I have time I’ll go and work for you.’

“For me, that’s a sign that people haven’t been overcome by this syndrome of dependency. When the peace (agreement) is signed, I’m confident that they will go home, and it’s our responsibility to encourage them to do so,” he said.

But the long years of war also have negatively affected the moral health of the local Acholi people, the priest said, noting that night commuting has contributed to premarital sex among young teens.

“Youth are now learning things from their fellow youth, and some people have become parents in a situation where they are too young and unprepared. They lack understanding of how to bring up families. These are serious challenges to us as a community, as parents and as pastors,” Father Ojara said, adding that the HIV rate in his area is almost double the national average.