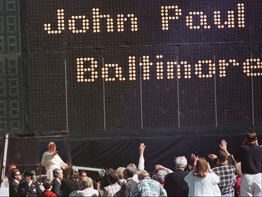 The new Nationals Park in Washington, D. C., officially opened March 30. By the time Pope Benedict XVI arrives at the first “green” major league baseball stadium in the United States, the smell of peanuts and Crackerjacks will have permeated the air for only seven Washington Nationals home games.

Was it good timing on the part of the Vatican, or coincidence, that Pope Benedict will celebrate a 10 a. m. Mass April 17 in a practically untouched, $ 600- million plus baseball stadium? And that he will celebrate one Mass in a 2008 ballpark and another in a 1923 ballpark facing its final season? “Purely coincidental,” said Joseph Zwilling, director of communications for the Archdiocese of New York.

Baseball operations at the ballpark in Washington will have a few days after the ump calls the last out April 13 to prepare for the Mass on April 17. Catholics from around the country are planning to attend.

A 4,500- square- foot scoreboard will help everyone gathered in the 41,222- seat stadium to see Pope Benedict as his pontifical visit turns a sporting arena into a holy site.

The Archdiocese of Washington is “moving a million miles a minute,” said Susan Gibbs, director of communications for that archdiocese. As of late mid- March, choir rehearsals were starting and she was hoping altar construction plans would move a little faster.

“ We’ve had five months to put together a Mass for over 46,000 people,” said Ms. Gibbs, adding they’ve had assistance from two event managing companies. Audio, media, music, video, a three- hour pre- Mass program, and orchestrating how people will receive Communion from about 300 priests and deacons in 20 minutes makes for ample planning.

That’s all before the public walks through the turnstiles and metal detectors.

The Archdiocese of New York is preparing for the third visit to Yankee Stadium from a pope.

“ No other venue has hosted a pope in the United States more than Yankee Stadium,” said Michael Margolis, manager of media relations for the New York Yankees. Pope Paul VI celebrated Mass at the stadium in 1965, and Pope John Paul II did the same in 1979.

The stadium staff is facilitating the operational aspects for the April 20 Mass, such as scoreboard use, electricity, loading materials for stage construction, and ensuring that the facility is functioning well.

“ But at the end of the day, the archdiocese is organizing this event,” said Mr. Margolis. “ They let us know what they need, and we’re doing the best we can for them.”

Mr. Zwilling has been through the process before.

“ It is huge – a tremendous challenge,” he said, “ balancing so many different interests that go into making this visit.”

He spoke of the faithful who want to be with the Holy Father wherever he goes and the many more who can’t be physically present. The media must also blend into the event without causing any disruptions.

“ It’d be a shame if they didn’t want to cover it,” said Mr. Zwilling, who stressed “ trying to make the event as spiritually and personally meaningful as possible is the utmost importance.”

Mr. Zwilling’s staff was shown around Yankee Stadium – including tunnels and rooms the public doesn’t know about – to learn its intricacies to make sure every detail falls into place and to ready the stadium, said Mr. Zwilling, who is also general manager for the Catholic Channel on Sirius satellite radio.

As in Nationals Park, the distribution of the Eucharist will be a feat. Rehearsals will help approximately 550 priests and deacons move easily through sections, led by guides. A limited number of people will receive Communion from Pope Benedict. Everything needs to be in place by late Saturday night.

“Fortunately,” said Mr. Zwilling, “ we have a producer for this who did the papal Mass in 1987 at Dodgers Stadium.”

Event planners will be able to descend on the stadium immediately after the final out of the April 17 game between the Yankees and rival Boston Red Sox, with “ only 48 hours to accomplish this transformation,” said Mr. Zwilling.

Construction of the stage will transform the infield positions of Derek Jeter and Alex Rodriguez into an altar fit for a pope.

The massive platform will cover the dirt area around the bases and back to home plate, supporting the clergy along the first and third baselines. The Holy Father will be in the middle of the stage, over second base.

“ I hope he blesses shortstop and says a little something to ensure no bad hops come my way this season,” said Mr. Jeter, shortstop for the Yankees. “ It will be a special day – and a special year – for Yankee Stadium.”

Stadium and archdiocesan officials at both venues would not comment on security information, other than to mention it is being handled through the United States Secret Service.

“ Their sole attention is on the liturgy itself,” said Mr. Zwilling, such as placement of the sacred vessels, where altar servers stand and other elements.

“ We’re hoping we are where we need to be,” said Mr. Margolis.