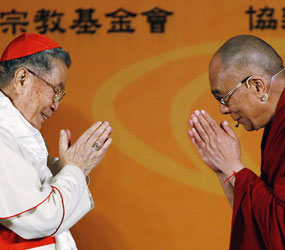 KAOHSIUNG, Taiwan – The erosion of moral values and materialism have caused distrust among people and damaged relationships in society, Cardinal Paul Shan Kuo-his and the Dalai Lama said during a Sept. 2 meeting in Taiwan.

Cardinal Shan, the retired bishop of Kaohsiung, was the only religious figure the Dalai Lama met during his Aug. 30-Sept. 3 visit to Taiwan, reported the Asian church news agency UCA News. The exiled Tibetan spiritual leader was invited to visit by seven counties and cities in southern Taiwan, which was devastated by Typhoon Morakot in early August.

The Dalai Lama said school education today focuses too much on the material aspects of life rather than moral values. Worldwide, there is a general lack of emphasis on virtues such as love and compassion, he added. He noted that in the West churches traditionally have provided moral education.

Cardinal Shan agreed there is a need to boost moral education and said human development depends not only on the physical and the material, but also on spiritual, ethical and religious values. Taiwan’s emphasis on economic and technological advancements has hurt society, he said.

Both leaders also highlighted the importance of mutual respect in interreligious dialogue. The Dalai Lama said religious believers must show others the meaning of life and the importance of having good values. Cardinal Shan said that in such dialogue one should not attempt to convert the other person or imply that one’s religion is superior to others.

Before the Buddhist-Catholic dialogue ended, the two leaders took turns leading prayers for typhoon victims in Taiwan and for world peace.

More than 1,000 people, including Buddhists and Christians, attended the discussion held in a hall inside the Hanshin Arena shopping complex. The event was organized by a Tibetan religious foundation in Taiwan.