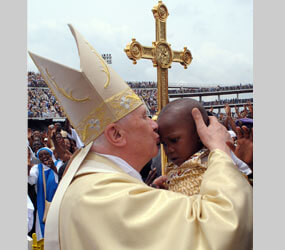 VATICAN CITY – The working document for this fall’s Synod of Bishops for Africa called for a united effort among Catholics to help end the rampant injustices fueling conflicts on the continent and to usher in an era of peace.

The document said the synod would have to find ways to better prepare the faithful in Africa for a more visible and active role in promoting unity in the church and in society and in working for the common good.

The Second Special Assembly of the Synod of Bishops for Africa will be held in the Vatican Oct. 4-25 and will focus on the theme “The Church in Africa in Service to Reconciliation, Justice and Peace.”

The working document was highly critical of the effects of globalization on the continent, saying it “infringes on Africa’s rights” and tends “to be the vehicle for the domination of a single, cultural model and a culture of death.”

But it also pinned the blame for many of Africa’s ills on the evil in people’s hearts, which makes them thirsty for riches, power or revenge.

Following up on the first African synod, which was held in 1994 and looked at evangelization through personal witness, the second assembly was to allow church leaders to address the continent’s changing religious, demographic, social and political scenes and discuss new ways to proclaim the Gospel by being “the salt of the earth” and “the light of the world.”

The overall goals of the synod, the working document said, are to assess what has been accomplished since the post-synodal papal document “Ecclesia in Africa” (“The Church in Africa”) presented its recommendations in 1995 and to look at what remains to be done in response to the changing situations in Africa.

While the 1995 document has been put into action and continues to be a timely and useful guide for the church on the continent, it has not been adequately distributed and implemented in some places, the working document said.

The working document, based on responses to a questionnaire sent out to dioceses in 2007, listed a number of shared expectations for the synod:

– Finding ways the Gospel can be inculturated or better grounded in local cultures.

– Helping Catholics get a firmer grasp of their faith so as to make Christ more a part of their lives and inspire them to bring his transforming message to the world.

– Paying greater attention to and developing a more creative pastoral response to the spiritual and moral needs of couples and families.

– Underlining the need for greater investment in education, especially in establishing higher education programs to train not just workers but also future entrepreneurs and business people.

– Better integrating women and the laity into the church’s leadership and pastoral planning.

– Getting the church more involved in using traditional and new media.

– Helping the bishops be more effective agents for overcoming ethnic and tribal divisions by being united in denouncing injustices and being a voice for the voiceless.

The document said that being a Christian and belonging to the universal church helps each Catholic put aside his or her differences of origin or ethnicity and brings people closer together as brothers and sisters.

The church’s sacraments, especially the sacrament of reconciliation, help form individuals’ consciences, inspire them to share God’s love with others, and guide them to replace fear with hope and the logic of revenge with reconciliation and forgiveness, it said.

Despite many signs of renewal and reform, Africa still faces many problems, said the text.

Political instability and selfish leaders continue to compromise peace in parts of Africa, it said. Some politicians foster divisions among their people, violate human rights or use religion to pursue their own agendas, it said.

The loss of respect for common traditional African values has led, in some parts of the continent, to relations between people of one religion and another “degenerating into a true Christian and Muslim rivalry.”

Political and social disputes are sometimes resolved with violence and fledgling democratic processes can sometimes disintegrate into “scenes of fratricide orchestrated by rival parties,” it said.

Decades of armed conflict in Africa have led to “a culture of violence, division and warrior heroes,” and the continued sale of arms by rich nations to ruling oligarchies fuels numerous wars, the document said.

“In some places, a true slavery still exists” because salaries are insufficient or sporadic and international aid often comes with “unacceptable conditions,” it said.

In addition, the document said, international financial programs aimed at restructuring the African economy “seem to be having a dire effect.”

The forced restructuring has led to an extremely fragile economy and the breakdown of society as can be seen by increased crime, the widening gap between rich and poor and massive migration to already overcrowded cities, said the text.

The document was especially critical of the economic and social effects of globalization.

It criticized multinational corporations that continue to “systematically invade the continent in search of natural resources,” adding that Africa’s rights are infringed upon by nations seeking control of its enormous mining reserves.

These outside interests together with “the abundance of natural resources on the African continent continue to pose a threat to peace, justice and reconciliation,” it said.

Globalization risks seriously harming societies with its “logic of the world economy which disregards what is truly a part of the human person,” such as the spiritual, moral and cultural values and gifts of local African traditions and religious faith, said the text.