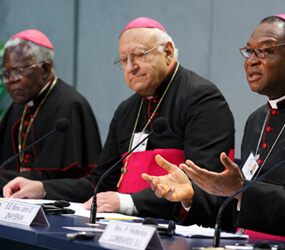 VATICAN CITY – The greed, corruption and unjust economic structures fomenting conflict and poverty in Africa must be overcome through the united cooperation of all people of good will, said the Synod of Bishops for Africa.

In their final message to the world, the 275 members of the synod also said condoms will not alleviate the scourge of HIV and AIDS and insisted on respect for religious freedom in predominantly Muslim communities.

Poverty, misery, war and chaos are most often caused by the decisions and actions of “people who have no regard for the common good” and who often take advantage of “a tragic complicity and criminal conspiracy of local leaders and foreign interests,” said the synod’s message. A preliminary version was released Oct. 23.

The bishops praised those who have used their role in public office for the common good.

But the bishops criticized the “many Catholics in high office (who) have fallen woefully short in their performance in office.” The bishops called on these leaders to repent or resign from political office “and stop causing havoc to the people and giving the Catholic Church a bad name.”

The synod urged local churches to intensify their efforts to offer spiritual care and chaplaincies for Catholic politicians as well as in evangelizing policymakers.

Africa needs “saintly politicians who will clean the continent of corruption, work for the good of the people and know how to galvanize other men and women of good will from outside the church to join hands against the common evils that beset our nations,” said the message.

The bishops called for “a new and just world order” in which poor nations are freed from the burden of debt, “which literally kills children.”

International corporations operating in Africa must stop “their criminal devastation of the environment in their greedy exploitation of natural resources,” the synod said.

The bishops lamented that no international body or world leader has come forth to stop “these crimes against humanity” that “foment wars in order to make fast gains from chaos at the cost of human lives and blood.”

The church’s valuable work in fighting HIV and AIDS and caring for those affected must continue to receive support, said the message.

The synod said that it agreed with Pope Benedict XVI that condoms would not beat the pandemic. It called on people to recognize the success obtained by prevention programs advocating abstinence and fidelity within marriage.

Archbishop John Olorunfemi Onaiyekan of Abuja, Nigeria, president of the synod’s message-drafting committee told reporters that the church is “second to none” in helping people affected by HIV and AIDS and that its contribution deserves more recognition.

“Many of those who go around distributing condoms will not go near anybody with HIV and AIDS and there are many who need assistance,” he said at a Vatican press conference Oct. 23.

“We hope that the whole question of HIV-AIDS can be handled in such a way that it doesn’t become always a battle over whether you believe in condoms or not,” he said, adding that people’s energies and resources are better spent on helping those suffering and urgently in need of care.

The synod’s final message hailed interreligious dialogue and cooperation with Muslims, saying such efforts have proven successful and effective.

While the synod praised the predominantly Islamic governments that allow Catholics the freedom to worship, it said that was not enough.

“Freedom of religion includes also freedom to share one’s faith, to propose, not impose it, to accept and welcome converts,” said the message.

“We need to make room for every faith to contribute fully to the good of humanity,” said the bishops.

The synod said it sees hope for the future and is not discouraged by the enormity of problems in Africa.

The synod called on the continent’s bishops, priests, religious and laity to become more united and conform their lives more closely to the Gospel.

Division within the church “wastes energies, frustrates efforts and gives room for the enemies of the church to neutralize our witness,” said the bishops.

The church, together with all people of good will, must continue its efforts to tackle poverty and promote peace, justice and reconciliation on the continent.

The laity, especially Catholic leaders, must become more knowledgeable about Christian culture, the Bible and church teaching, said the synod.

Sacred texts and other materials are all available at low cost so “there is no excuse to remain ignorant in the faith,” said the bishops.