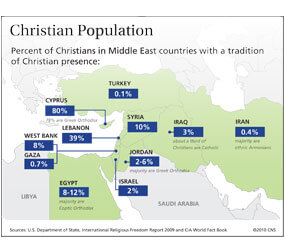 VATICAN CITY – Concern, and even alarm, over the real threat of the disappearance of Christians from the Middle East was a recurrent theme at the Synod of Bishops focusing on the region.

Christians, who were present in the region long before Islam, “are presently facing a deadly dilemma: to choose between disappearance and isolation, which would bring an end to their historical role and their mission,” said Hares Chehab, secretary general of Lebanon’s National Committee for Islamic-Christian Dialogue.

Chehab, a papally appointed observer at the synod, addressed the gathering Oct. 12 and echoed concerns voiced by a variety of bishops who spoke before him.

The region is gradually emptying itself of Christians, “who had contributed so much to the elaboration of its civilization, and were always the pioneers in the battle for its freedom, its ascent to modernity,” he said.

The emigration of Christians cannot be attributed only to economic difficulties, “otherwise the whole region would have been depopulated,” Chehab said. He pointed instead to “discrimination, persecution in certain areas, fear in others, the lack of freedom (and) inequality of rights” as the leading motives for leaving.

A key to addressing the problem is to strengthen Christian-Muslim dialogue, he said. But while dialogue is taking place in many countries throughout the region, too often it never gets beyond the common belief in one God and values like the importance of family, which Christians and Muslims share, he said.

The standard dialogue style “should give way from now on to another form where the language of complaisance would be banned, to focus especially on truth, no matter how hard it is, but with love and sincerity,” Chehab said.

Chehab, like many of the synod members, pointed to the Israeli-Palestinian conflict as the chief reason for the strained relations and sense of insecurity that push many Christians to flee the region.

Melkite Patriarch Gregoire III Laham of Damascus, Syria, told the synod that “among the most dangerous effects of the Israeli-Palestinian conflict” is the phenomenon of Christian emigration, “which will make Arab society a society with only one color, a society uniquely Muslim.”

If the Middle East is seen as Muslim and the West seen as Christian, “any occasion would be propitious for a new clash of cultures, of civilizations and even of religions – a destructive clash between the Muslim Arab East and the Christian West,” the patriarch said.

Patriarch Laham also called for increased Christian-Muslim dialogue and for Christians to tell their Muslim brothers and sisters “what our fears are,” including concern about a lack of separation between religion and government, lack of equality and about a legal system that is based on Islamic law.

U.S. Cardinal John P. Foley, grand master of the Equestrian Order of the Holy Sepulcher of Jerusalem, told the synod that praying for peace in the Middle East is an obligation all Christians share.

“I am convinced that the continued tension between the Israelis and the Palestinians has contributed greatly to the turmoil in all of the Middle East and also to the growth of Islamic fundamentalism,” he said.

“While many, including the Holy See, have suggested a two-state solution to the Israeli-Palestinian crisis, the more time passes, the more difficult such a solution becomes, as the building of Israeli settlements and Israeli-controlled infrastructure in East Jerusalem and in other parts of the West Bank make increasingly difficult the development of a viable and integral Palestinian state,” the cardinal said.

Melkite Archbishop Joseph J. Zerey of Jerusalem said Christians must make their own examination of conscience about why their brothers and sisters are leaving the region in such numbers.

Emigration, living the faith “half-heartedly” or giving in to material, political or social pressures often are the result of not living a life centered on prayer and Christian charity, he said.

“Many of our so-called ‘Christian’ families have a vital need for re-evangelization and to personally embrace the forgiveness and mercy of God earned by the passion, the death and the resurrection of our Lord Jesus Christ,” the archbishop said.

He encouraged the bishops to welcome the new Catholic movements as instruments for strengthening the faith commitment of Christians in the region.

Syrian Catholic Archbishop Basile Casmoussa of Mosul, Iraq, said emigration has meant that Christianity is losing its presence in the land where it was born. The situation is exacerbated by “waves of terrorism inspired by religious ideologies,” which crush minorities, including “Christians, the most vulnerable,” as well as by “the alarming decrease of births among Christians” and an ever growing birthrate among Muslims, he said.