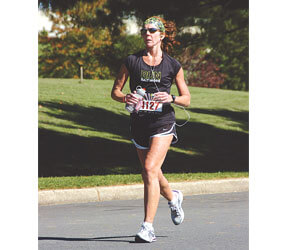 Like many who hit the half-century mark, Carole Williamson celebrated her 50th birthday in a special way. On June 18, with 199 friends and acquaintances, she “partied” for 12 hours. When it ended, she was tired but exhilarated. No hangover for Williamson.

The “party” was a 40-mile footrace in West Virginia mountains that included running up a ski slope on a course that, the race’s website proclaims, “climbs a total of 5,474 feet and descends 4,856 feet.” That’s a climb of one mile and 194 feet, with a lot of ups-and-downs.

Up next is her ninth Under Armour Baltimore Marathon Oct. 15, part of the Baltimore Running Festival, as well as another 50-K and 50-miler.

In an interview, Williamson said the Baltimore marathon is “dear to my heart” because the 2001 version was her first race over 10-K (6.2 miles). A friend had convinced her to run. Her reaction at the finish: “Wow!”

“I am not a ‘fast’ runner,” the Eldersburg resident readily offers. “Endurance is my strong suit. I can go on forever. I can outlast anybody out there.”

For Williamson, the joy of distance running goes beyond the “high” familiar to devotees.

“Omigosh, the things you get to see,” she said.

She ran the Freedom’s Run Marathon in Harper’s Ferry for the scenery offered by a course that traversed four national parks.

Williamson teaches early childhood education at Carroll Community College. She and husband Steve have three daughters, Alyssa, an eighth-grader at Oklahoma Road Middle School; Becky, a Carroll Community College freshman who graduated from Baltimore’s Seton Keough High School in June; and Kristen, who is married and pursuing a master’s degree in midwifery at Johns Hopkins.

Steve has five months left on a two-year assignment in Saudi Arabia for Northrop Grumman.

At St. Joseph Parish, Williamson has been involved in Courage Kids, a bereavement program for children who have lost parents or gone through a divorce, and worked with youth groups, though she has backed off a bit during Steve’s overseas assignment.

Williamson has also been a catechist, said Maria Klicpera, the parish administrator, and has been “very active, always involved and very committed – always the first to volunteer.”

The seeds of Williamson’s ultra-miles obsession were planted in 1994 when the family moved away from Catonsville and the gym where she had worked out.

In Eldersburg, she said, “There was nothing here, no gym. So, I started to run.”

Today she runs close to 40 miles a week, cross-trains and lifts weights. Last year, she said, she ran 1,944 miles.

Just when you think you’ve heard it all, Williamson drops this one:

She attempted to get into an upcoming North Carolina 100-miler but wasn’t quick enough. The race offered 250 slots online and another 50 by hard copy application. She was on one computer, Steve on another at zero hour for applying. They were too late.

“The limit was reached in the first two minutes,” Williamson said. So she overnighted the hard copy application. That, too, arrived too late.

She is confident she will run a 100-miler and that Steve, who began running in Saudi Arabia, will run a marathon with her.

“We try to get out for a little trot each time he is home for a visit,” she said. “I think he’s going to do a marathon with me before I stop. I can’t see me stopping for a very long time, so he has plenty of time to train to run with me!”