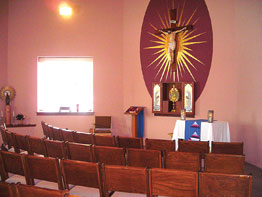 So many people have been attending the 8:30 a.m. daily Mass at St. Joseph in Sykesville that space in the 50-seat chapel has often been limited to “standing-room-only.”

“Some of our friends have been stuck standing in the back,” said Father Weik, pastor of the Marianist faith community. “It’s a real mix of people who attend. We have our regular devotees, but we also have home-school moms and visitors.”

To better accommodate the crowds, St. Joseph reconfigured its chapel on Dec. 2. Nearly 20 seats were added when the chapel’s middle aisle was eliminated and the seats were rearranged in a semi-circle. A smaller altar and ambo were also introduced to allow more space in the sanctuary.

The chapel, dedicated to Our Lady of the Pilar, also serves as a perpetual adoration chapel that attracts visitors 24-hours a day, according to Father Weik. Parishioners punch in a numeric code to gain access to the chapel late at night or early in the morning, he said.

“The people have responded well to the reconfiguration,” said Father Weik, happily reporting that no one was left standing on the first day of Mass after the changes.

“The chairs are a little closer together so there’s some real rubbing of elbows,” he said. “It takes some getting used to.”

With the fast-paced growth of Carroll County in recent years, St. Joseph’s registry has boomed. There are now more than 3,000 registered families in the parish.

At the same time the chapel was reconfigured, St. Joseph introduced a 6 p.m. Sunday Mass hosted by the youth of the parish. The liturgy is open to the entire faith community, the pastor said, with a special effort to be “youth and young-adult friendly.” A youth band called “Forty Days” provides the music for the weekly celebration.