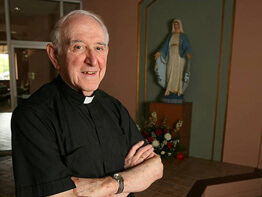 “Retirement” isn’t in Father Paul A. Reich’s vocabulary.
A Marianist priest for 50 years, the 78-year-old associate pastor of St. Joseph in Sykesville said he loves his ministry as much as ever and he has no plans of slowing down.

“There’s always something to do once you’re ordained,” he said with a smile. “I’ve never lost the desire to be a priest. It’s what I’ve always wanted to be.”

Father Reich celebrated his golden jubilee with a special Mass June 17 at St. Joseph. He has been an associate pastor there for 21 years, devoting much of his time to the RCIA program and assisting with the sacramental needs of the community.

The priest said he loves preparing people to be received into the Catholic Church and has been inspired by their commitment to the faith.

There was never any doubt that Father Reich would enter the religious life. The Pittsburgh native had two uncles who were Marianists and he attended a Marianist high school. As a teen, he was inspired by the example of the priests and brothers who served in his community.

“There really was a wonderful family spirit that I saw in them,” said Father Reich, calling himself “fair game for religious recruiters.” “I used to play ball with them. They could be quite strict, but they were really good men.”

Father Reich left high school to enter the Marianist novitiate in New York. After attending college at the University of Dayton in Ohio, he studied theology and prepared for the priesthood at the University of Fribourg in Switzerland. Taking his classes in French and Latin, the young seminarian studied with seminarians from other religious orders including Redemptorists and Dominicans. He was ordained in Switzerland on July 14, 1957.

What was going through his mind on ordination day?

“I thought I was becoming a person to be truly of service to other people,” he said.

Most of his ministry has been in Catholic education. Father Reich was a theology, Latin or mathematics teacher at several high schools in New York, Ohio, Pennsylvania and Florida – often serving as chaplain of athletic teams. The priest was also the pastor of a church in Connecticut for nearly a year.
The biggest challenge of his priesthood has been changing assignments after establishing himself in a certain ministry, he said.

“Years back, we had no say on where we went,” he remembered. “Sometimes we would be uprooted from places we were working and that was difficult.”

In the last few decades, he said, there has been greater flexibility in working with Marianist religious superiors on assignments.

Describing St. Joseph parishioners as “supportive” and “very cooperative,” Father Reich said he is deeply grateful to the people he has served at the parish. He has enjoyed working with his fellow Marianists and called the Archdiocese of Baltimore a “wonderful” diocese.

“I’ve enjoyed the cooperation and inspiration of the entire diocesan system,” he said. “I’ve always felt supported in anything we’ve done.”