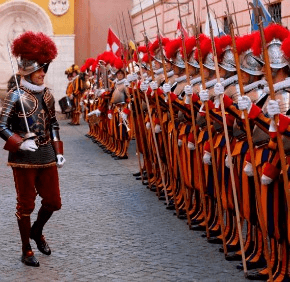 VATICAN CITY – With their left hands clutching a standard and their right hands raised with three fingers open symbolizing the Holy Trinity, 23 new Swiss Guard recruits pledged to “faithfully, loyally and honorably” serve and protect the pope and, if necessary, sacrifice their lives for him.
The pageantry of the annual May 6 ceremony did not lessen the solemnity of the occasion that marks the date in 1527 when 147 Swiss Guards lost their lives defending Pope Clement VII in the Sack of Rome.
The ceremony in the Vatican’s San Damaso Courtyard is meant to remind new guards of the seriousness of their commitment on the anniversary of their predecessors’ death.
Father Thomas Widmer, chaplain of the Swiss Guard, read to the new recruits their oath to protect the pope and the College of Cardinals when the See of St. Peter is vacant.

New Swiss Guard recruits dress before the swearing-in ceremony for 23 new recruits at the Vatican May 6. New recruits are sworn in every year May 6, commemorating the date in 1527 when 147 Swiss soldiers died defending the pope during an attack on Rome. (CNS photo/Paul Haring)

Following the proclamation, each of the new recruits swore to “diligently and faithfully” abide by the oath through the intercession of “God and … his saints.”
Prior to the ceremony, the new recruits and their families, friends and fellow guards attended a morning Mass presided by Cardinal Pietro Parolin, Vatican secretary of state.

Cardinal Parolin told them to respond to their first calling as baptized Christians: to bring “the Gospel to men and women and to give witness to the joyful message of true life.”

The sacrifice of the brave 147 soldiers who perished in the Sack of Rome, he added, would not have been possible without “faith in the Lord of life, without faith in the resurrection.”
“Sustained by this faith in the risen Jesus and strengthened by the joyful experience that the Lord gives life in its fullness, I invite you dear guards, to have the courage to be witnesses in today’s world despite the difficulties,” the cardinal said.

Pope tells struggling Europe he has a dream for its future