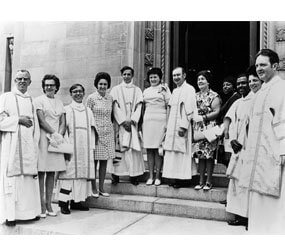 After Cardinal Lawrence Shehan ordained Deacon George Evans as one of the first permanent deacons in the United States 40 years ago, a lot of people didn’t know what to make of the new clergyman.

“It was a struggle in the first few years,” remembered Deacon Evans, now retired but still assisting at St. Rita in Dundalk. “People were asking, ‘Why are you doing what priests do?’”

“I was accepted,” said Deacon Derouaux, now retired in Florida, “but people had a difficult time with some of the things we were doing in the liturgy. To them, it was important that the priest do everything.”

Even some priests, unsure how the permanent diaconate related to their own ministry, could be suspicious.

“We were the first (permanent) deacons in the United States,” Deacon Derouaux said, “and I know there was apprehension amongst the laity and some priests and we had to prove not only to them, but ourselves, that we could function properly as deacons in answering the needs of our community.”

Four decades after Deacons Evans and Derouaux joined four others in becoming the first men in the country ordained to the permanent diaconate in a diocesan program, there’s a far greater acceptance of the diaconate.

As Deacons Evans and Derouaux celebrate the 40th anniversary of ordained life, the only two surviving deacons from their historic class believe the permanent diaconate has become a vital ministry in the church. They see it as a blessing.

Permanent deacons had long played an integral role in the first few centuries of the church, but disappeared in the Middle Ages. The diaconate became limited to “transitional deacons” – men who would go on to become priests.

Pope Paul VI reestablished the permanent diaconate in 1967, allowing both single and married men to be ordained to the ministry.

Deacons proclaim the Gospel and preach at Mass. They also perform baptisms, witness marriages and conduct wake and funeral services.

The word for deacon comes from the Greek word “diakonos,” which means “servant.” As a result, service is an essential component of diaconal ministry, with deacons frequently working in hospitals, prisons, social outreach and educational programs. Some serve as pastoral life directors, pastoral associates and archdiocesan leaders.

As “permanent” deacons, men ordained to the ministry do not become priests – unlike “transitional” deacons.

Deacon Evans was attracted to the ministry after speaking with Bishop F. Joseph Gossman, a former auxiliary bishop of Baltimore. Deacon Evans had been a lector at Our Lady of Mount Carmel in Essex and was very active in his parish.

He began a formation program organized by the Josephites at St. Joseph Seminary in Washington, D.C. Deacon Evans studied with 26 deacon candidates from the Archdioceses of Baltimore and Washington and the Diocese of Richmond. The Baltimore candidates would later continue their three-year formation at St. Mary’s Seminary in Roland Park.

The six deacons ordained for the Archdiocese of Baltimore on June 12, 1971 were all married men who had the support of their wives. Deacon Americus Roy, the first African-American permanent deacon, was among them, as were Deacons Charles Kruger, Bernard Bak (who received permission to be ordained a priest in 1988) and Richard Johe.

“I was 37 at the time – the baby of the class,” remembered Deacon Evans.

Deacon Evans recalled that a camera crew from NBC News recorded the inaugural ordination for a national broadcast. A June 18, 1971 account of the ordination in The Catholic Review noted that a rock group played a contemporary hymn as Cardinal Shehan and clergy extended the kiss of peace to the new deacons.

“Everyone wanted to see this ceremony,” Deacon Evans said. “It was a great day. It was exciting.”

Deacons Evans and Derouaux have found a sense of joy in their ministry of service.

Deacon Evans focused much of his ministry in religious education at Our Lady of Mount Carmel and St. Rita. He has also been active in the Dundalk Area Ministerial Association, an interfaith outreach that helps those in need.

Deacon Derouaux was a former administrator of St. Brigid in Canton and a chaplain at The Johns Hopkins Hospital in Baltimore.

“I really felt that I was doing good for people,” Deacon Derouaux said. “I visited the sick, administered the Eucharist and tried to bring comfort to people.”

Both deacons found support from their families, clergy, bishops, parishes and the wider archdiocesan community, they said. It was that support that allowed them to find their way as they blazed a new trail in the church.

“I wanted to be of service to people in need,” Deacon Derouaux said. “I would encourage others to consider it.”

Today’s deacons come from a wide range of ethnic and social backgrounds and represent every corner of the archdiocese. Archbishop Edwin F. O’Brien ordained 14 permanent deacons in May – the largest class in more than a decade. The new deacons included the president-CEO of a hospital, a scientist, a social worker and a biomedical research manager.

“We are now in our second generation of deacons,” said Father Patrick Carrion, director of the deacon formation program. “We see them as men of service – ministering to vulnerable populations. Many more of them are taking on leadership roles in the church.”

In his homily at the May ordination of new deacons, Archbishop O’Brien said deacons serve not in their own names or by their own authority, “but on behalf of the church and the name of Christ who, through you, still comes to serve and not to be served.”