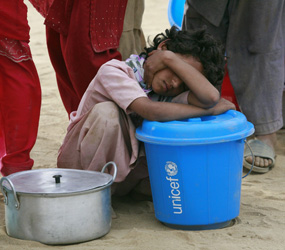 WASHINGTON – Thailand, Gaza and South Africa were ranked as some of the “worst places for refugees” in the 2009 World Refugee Survey for attacks and abuse by militaries and xenophobic civilian mobs.

The U.S. Committee for Refugees and Immigrants released its annual report June 17 at a press conference at the Canadian Embassy in Washington.
The seven worst places were singled out for what Merrill Smith, the survey’s editor, called “egregious refugee situations.”

More than 1,400 Palestinian refugees died in an Israeli invasion provoked by rocket attacks from Gaza, the survey said. The survey also reported that the Thai navy towed out to sea and abandoned disabled boats with a reported 992 Rohingya refugees from Myanmar.

South Africa was a case where “the governments are not always the perpetrators,” Smith said. In May 2008, mob attacks on slums and shantytowns killed at least 62 foreigners and displaced thousands from their homes.

“They were not targeted for being refugees, but for being foreigners, particularly African foreigners like Somalis,” Smith said.

The survey, now in its 49th year, looks at statistical and anecdotal evidence gathered in 2008 by the refugee committee and international research partners. The survey grades countries and regions on four categories of “refugee rights” laid out in the 1951 U.N. Refugee Convention.

Marks of “A” through “F” were given in the categories of physical protection/”refoulement,” or forcibly returning refugees to the countries they were trying to escape; detention/access to courts; freedom of movement and residence; and the right to earn a livelihood.

Kenya, Malaysia, Egypt and Turkey also received the “worst” stamp for outright physical abuse of refugees, strict border enforcement and “warehousing,” or maintaining refugee camps that cut the inhabitants off from the social and economic life of the host country.

While the survey handed out multiple “F” grades to the seven countries on its “worst” list, it praised Brazil, Ecuador, and Costa Rica for their efforts to protect refugees and integrate them into economic life. Those three countries earned high grades in the four categories.

The survey noted Brazil’s refugee system, in particular, for its “well-functioning, modern refugee system. Refugees there are free to live and travel within the country and are eligible for the same work permits as Brazilian nationals.

Brazil also resettled more than 100 Palestinians who fled violence in Iraq and also removed the word “refugee” from their work permits to “prevent confusion on the part of employers that had blocked employment of some refugees,” the survey said.

The three “best” countries exemplify the attitude Lavinia Limon, president and CEO of the U.S. Committee for Refugees and Immigrants, said she wished more countries could adopt: embracing refugees as opportunities to increase human capital. Ecuador and Costa Rica were cited for their efforts to integrate Colombian refugees into economic life.

Ecuador’s trial run of a speedy registration process has a goal to issue refugee visas to 50,000 Colombians. Costa Rica allows Colombian refugees to work or run their own businesses under the same standards as nationals, while the United Nations’ refugee commission offers micro-loans to refugees trying to launch a business venture.

Limon also announced the launch of the World Refugee Survey’s online version, www.worldrefugeesurvey.org, where the refugee committee and its international research partners can continually update and track refugee situations.

Similar to Wikipedia.com in that Web pages and articles can be edited by multiple Internet users, the committee’s wiki will provide opportunities for people throughout the world to access the World Refugee Survey and add their own reports. It will eliminate the six-month delay in publishing information from the previous year, Limon explained.

“We hope it becomes a living document,” she said.

With the wiki up and running, the 2009 published edition will be the committee’s last in print, replaced instead by the continually updated online report. The online version will still provide “Refugee Rights Report Cards,” but on a more immediate time schedule than before.