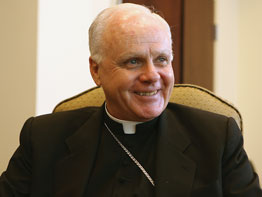 CAMBRIDGE – The vast majority of priests in the Archdiocese of Baltimore are happy in their ministry and committed to serving the entire archdiocese, according to the results of a new survey obtained by The Catholic Review.

Focused on issues of unity among priests and their bishop, the mailed survey was conducted by the National Organization for Continuing Education of Roman Catholic Clergy, in partnership with the Center for Applied Research in the Apostolate. Priests in other dioceses were also surveyed as part of a national look at unity among priests and bishops.

The results were presented during the biennial Priests Convocation Sept 23-25 in this Eastern Shore town.

The convocation was attended by 160 archdiocesan priests and religious order priests who serve in parishes of the archdiocese. Archbishop Edwin F. O’Brien celebrated two Masses during the convocation and held a two-hour question-and answer forum with the participants.

Priests welcomed Father John Rapisarda, associate pastor of Our Lady of Mount Carmel in Essex, as the newest ordained priest of the archdiocese, and during a banquet they toasted five priests who retired in the previous year. They also prayed for 12 priests who died in the last year – six archdiocesan and six religious order priests.

It was a week of personal reflection and statistical analysis.

More than eight in 10 said they are satisfied with the support they receive from the archbishop, their vicar bishops and their fellow priests.

Still, there were some signs of concern. Nearly half described the unity of the priests of the archdiocese as “somewhat” or “very strong,” while 40 percent called unity among the priests “somewhat weak” and 13 percent said it was “very weak” – similar numbers to the average of other surveyed dioceses.

Father Samuel Young, pastor of St. Joan of Arc in Aberdeen, told The Catholic Review he was encouraged that a solid majority of those surveyed are happy in their priesthood. Events like the convocation help strengthen the bond among priests, he said, as do archdiocesan-wide gatherings like the Chrism Mass.

“I think there is a lot of unity in our archdiocese,” said Father Young. “What ultimately unites us is that we’re ordained priests. We’ve committed ourselves totally to God and to serving people.”

During the convocation, clergy broke into small groups to discuss the findings and their perceptions of presbyteral unity.

Father Young recalled how he struggled with the transition to a new parish after being reassigned earlier in his priesthood.

“I got calls from priests at my former parish encouraging me and giving me support,” he told The Catholic Review. “They let me know that they were there for me.”

“It’s good for us to get together to see friends, pray together, relax, listen and discuss relevant issues,” said Monsignor Farmer. “Sometimes it can be hard when there’s so much else to do. Schedules can be very demanding.”

Others said the geography of the archdiocese, which ranges from the mountains of Western Maryland to southern Anne Arundel County, can be a challenge to unity

Father Paschal Morlino, O.S.B., pastor of St. Benedict in Baltimore, said he was encouraged that for the first time, religious order priests were invited to attend the convocation.

“That’s a big step,” he said, “toward making us feel connected to the archdiocese.”