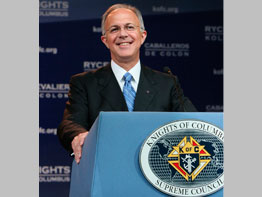 WASHINGTON – Carl A. Anderson, supreme knight of the Knights of Columbus, wants to talk with Sen. Joseph Biden, the Democratic vice-presidential candidate.

In a full-page advertisement that appeared in several newspapers Sept. 19, Mr. Anderson said he wants to discuss only one issue: Sen. Biden’s stance on abortion and his unwillingness to bring his Catholic views into the discussion of public policy on the issue.

“I hope that he will really consider this (meeting),” Mr. Anderson told Catholic News Service Sept. 19. “I hope that he will read Pope John Paul (II)’s ‘Evangelium Vitae’ (‘The Gospel of Life’). That document, maybe more than any other, is the heart of the teaching of the church about respect for human life.”

Appearing in the Washington Times, the Philadelphia Inquirer, the News Journal in Wilmington, Del., the Times-Tribune in Scranton, Pa., the Citizens’ Voice in Wilkes-Barre, Pa., and the Baltimore and Washington editions of USA Today, the ad comes in response to Sen. Biden’s Sept. 7 appearance on NBC’s “Meet the Press.”

During an interview with host Tom Brokaw, the Delaware senator said he accepted Catholic teaching that life begins at conception but that he could not impose his beliefs in the public policy arena.

“I’m prepared as a matter of faith to accept that life begins at the moment of conception,” Sen. Biden said during the interview. “But that is my judgment. For me to impose that judgment on everyone else who is equally and maybe even more devout than I am seems to me is inappropriate in a pluralistic society.”

Sen. Biden supported his view by citing the 13th-century writings of St. Thomas Aquinas, who discussed when a developing child in the womb received a soul and thus could be considered fully human.

A spokesman for Sen. Biden’s campaign issued a brief response to the letter Sept. 22.

“Anyone who knows Joe Sen. Biden knows just how much he loves his faith and respects his church. His Catholicism has sustained him through some tough times, and will sustain him as vice president,” spokesman David Wade wrote in an e-mail to Catholic News Service.

Mr. Anderson’s letter is the most recent response related to Catholic politicians addressing church teaching on abortion in national venues. Within days of Sen. Biden’s appearance on the NBC broadcast, several Catholic bishops responded with their own statements challenging the senator’s views.

The letter also interjects the Knights of Columbus into presidential politics and a campaign where the Catholic vote is being sought fervently by the Democratic ticket of Sen. Barack Obama and Sen. Biden and the Republican ticket of Sen. John McCain and Gov. Sarah Palin.

Between 1983 and 1987 Mr. Anderson held various positions in President Ronald Reagan’s White House, including special assistant to the president and acting director of the Office of Public Liaison in which he participated in the development of pro-life and pro-family initiatives.

“Our intention isn’t to enter the political fray,” Mr. Anderson told CNS. “It really is to address a matter within the Catholic community about how this issue ought to be understood.

“I would be much more interested in having a dispassionate discussion of this where it doesn’t affect political careers. But I’m not the one who’s chosen to interject this issue in this way at this time,” the supreme knight added.

Mr. Anderson, a consultant to the U.S. Conference of Catholic Bishops’ pro-life activities committee, opened his letter by addressing Sen. Biden as a “fellow Catholic layman.” The supreme knight wrote that by virtue of Sen. Biden’s position as a vice-presidential candidate, any statements he makes will “carry considerable weight, whether they are correct or not.”

The letter sets forth a case regarding the Thomist understanding of human development, saying the writings of the saint were based on a medieval understanding of biology and that he could only speculate on how an unborn child develops in the womb.

“I doubt that there is any other area of public policy where you would appeal to a 13th-century knowledge of biology as the basis for modern law,” Mr. Anderson wrote to Sen. Biden.

The Knights of Columbus ad can be viewed online at www.kofc.org/un/cmf/resources/SK_20080919.pdf.