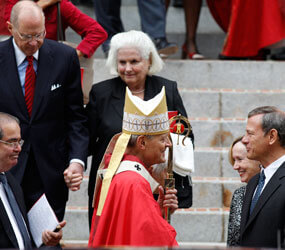 WASHINGTON – Human beings are not fully alive until they live for something greater than themselves, said Seattle Archbishop J. Peter Sartain at the 58th annual Red Mass celebrated at the Cathedral of St. Matthew the Apostle in Washington Oct. 2.

“It is God who created us who makes us complete, and it is a life lived in humble union with the servant-Savior that literally does the most good,” the prelate said at the liturgy traditionally celebrated in the nation’s capital the day before the opening of the U.S. Supreme Court’s new term.

He urged the 1,400 people at the Mass – many of them public servants – to live life for others. “A sound soul in a sound body makes for a balanced life, a life of integrity. And such sound, healthy living in lives that are given to public service lift up and transform society,” he added.

Although the faithful can “barely grasp” the depth of God’s humility and the greatness of God’s love, holiness is a life committed to discipleship – that which sets the standard for service, Archbishop Sartain noted. “We who are here this day know that it is from God that we come and toward God we are headed,” the archbishop said. “The vineyard is his, we are his, and the people we serve are his.”

Many members of the law profession also attended, including deans of local law schools, professors and law students. Additionally John Garvey, president of The Catholic University of America, was present at the Red Mass, so named because of the red vestments worn by the celebrants. The color red represents the tongues of fire often used to symbolize the Holy Spirit.

“We’re a nation that holds out enormous promise, and my prayer is we live up to that promise,” Cardinal Wuerl later said.

America has thrived because of the country’s laws and the citizens’ respect of such laws, he noted.

“We gather each year at the start of the judicial season to thank God for the blessing that we express as free people,” Cardinal Wuerl added. He said those blessings and prayers extend to members of the Supreme Court through to all individuals who work administering justice.

The cardinal said his prayer each year is the same – “that all of us are open to the promptings of the Holy Spirit so we can live up to the very best we are called to be.”

For the past quarter century Monsignor Peter Vaghi, pastor of the Church of the Little Flower in Bethesda, has served as the society’s chaplain. At a brunch following the Mass and attended by 600 people, Monsignor Vaghi urged members of the John Carroll society to witness to Jesus. He asked members “with renewed vigor then to share the Gospel, strengthen each other in faith and to expand our membership with great joy and conviction as we know God will take us by the hand and show us the way.”

Named for the first Catholic bishop in the United States, the John Carroll Society this year marked 60 years of serving the archbishop of Washington. Members are professional men and women who gather to learn about the faith, enhance fellowship and promote religious and charitable activities in the community.