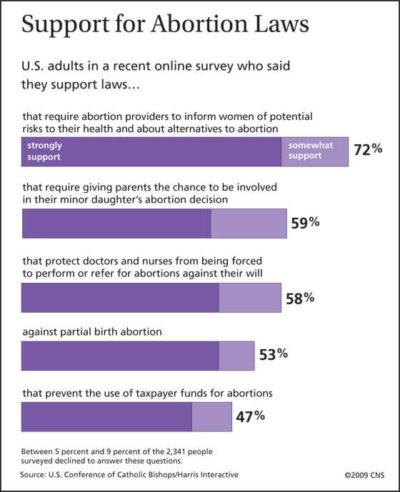 WASHINGTON – A new online survey conducted for the U.S. Conference of Catholic Bishops finds a majority of participants support at least some restrictions on abortion.

The survey conducted online Dec. 10-12 asked 2,341 people about the circumstances under which they would favor or oppose legal abortion and about what kind of regulations of abortion they would support or oppose.

Among those who said it should be legal for any reason, 9 percent would place no limits on abortion through all nine months of pregnancy, while 27 percent would allow unrestricted abortion only in the first trimester, and 6 percent through the first six months.

Among possible restrictions or regulations on abortion about which participants were asked:

– 47 percent said they strongly or somewhat strongly favor laws prohibiting the use of taxpayer funds for abortion.

Between 5 percent and 9 percent of the participants in the survey declined to answer some of the questions. The survey questions on abortion were part of an omnibus questionnaire on a wide range of topics. Participants could click on “decline to answer” as they chose, said Deirdre McQuade, assistant director for policy and communications at the USCCB’s Office of Pro-Life Activities.

The news release from the USCCB noted that Harris Interactive, which fielded the study for the USCCB, said the data was weighted using a propensity scoring system to be representative of the total U.S. population on the basis of region, age within gender, education, household income, race/ethnicity and propensity to be on the Internet. Harris said no estimates of sampling error could be calculated, according to the USCCB release.

David Krane, vice president for public affairs and policy for Harris Interactive, told CNS that Harris considers such surveys to be at least as accurate as the traditional phone polling of random samples of the public. He said the database from which the survey participants were chosen includes several million people who have agreed to be part of occasional surveys on a range of topics.

“We know quite a lot about them based on their demographic profiles,” Krane said. He explained that Harris compares the results of their weighted method of choosing survey participants against other sources of information, such as census reports. Election results and exit polls also are used to compare whether Harris’ online participants represent the range of demographic variety and opinions of the overall U.S. population, he said.

“We take the position that it is as accurate as traditional surveys,” he said.

The findings are generally similar to those of other polls conducted recently. The Web site, www.pollingreport.com, compiles data from major poll releases, where the following results were presented.

A Time magazine poll released in August found 46 percent said abortion should be always legal in the first three months of pregnancy.