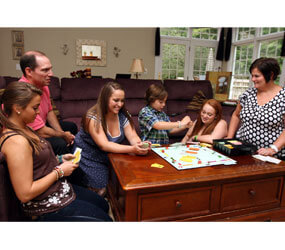 DAVIDSONVILLE – When Dr. Barbara McGraw Edmondson makes decisions about the future of Catholic education, the superintendent of Catholic schools isn’t just thinking in the abstract.

“I think about how it impacts the families,” said McGraw Edmondson, who was named superintendent in February after serving in the same post on an interim basis for eight months.

“I certainly have that perspective as a parent,” she said. “I also understand the sacrifice that it takes to send children to Catholic schools. Because we send our kids to Catholic school, we choose not to do other things.”

There was never a doubt that McGraw Edmondson’s children would receive a Catholic education. Although her husband, Joe Edmondson, is a Congregational Protestant, he attends Mass with the family and shares his wife’s faith values.

The Edmondsons’ youngest children, Liam, 8, and Bridget, 12, are enrolled in the School of the Incarnation in Gambrills – the institution McGraw served as founding principal for more than a decade before her appointment to the superintendent’s office.

She had previously served as a teacher in the Diocese of Metuchen, N.J., and the Archdiocese of Washington. She was principal of St. Ambrose School in Prince George’s County from 1995 to 2000.

“Faith is pretty much who we are and how we identify ourselves,” said McGraw Edmondson, whose family worships at Holy Family in Davidsonville.

Joe Edmondson noted that faith was not a central component of his family when he was growing up. That’s not the case with his own family.

“We live our faith every day through Catholic schools,” he said. “It’s not just Sunday. It’s getting reinforced five days a week at school. It draws me into it.”

Bridget, an eighth-grader at Incarnation, said she feels closer to God by attending Catholic school.

“If I went to a different school,” she said, “I wouldn’t have that same understanding of my religion.”

Liam, a third grader at Incarnation, noted that he learned about the Eucharist at school. He also studied the rosary and prays the devotion with his family at home.

While the focus of Catholic education in the past few years has been on determining which schools would remain open in the face of rising costs and changing demographics, the current focus is on moving schools forward, McGraw Edmondson said. At the end of the 2009-10 school year, 13 schools closed as part of a consolidation plan meant to strengthen the system.

“We want to make our schools compete with any kind of school out there because technology is integrated, there’s great instruction and there’s great leadership,” McGraw Edmondson said. “Everything that’s wrapped around our strategic plan is not just about keeping schools open – it’s about making schools all they can be.”

The strategic plan includes more than 700 tasks, McGraw Edmondson said, and she is receiving support in her department and every other department of the Catholic Center to complete them successfully, she said.

McGraw Edmondson admitted that she has much to juggle as a mother with a demanding job. When she was principal of Incarnation, she learned the importance of not letting her family and professional roles get too intertwined.

“I felt it was unfair to teachers on back-to-school nights for me to attend their presentations,” she said. “If I’m sitting in the room, it’s almost like an evaluation. I just collected the material and stopped by the classrooms before all the other parents came.”

Sometimes, people can overestimate her power as superintendent.

When there’s a threat of a snowstorm, the superintendent’s telephone starts ringing at her Davidsonville home. Classmates of her four children want to know whether McGraw Edmondson has the inside scoop on weather closings at their Catholic schools.

“It’s funny,” McGraw Edmondson said with a laugh. “We cancel classes on the same schedule as the public schools, so I will not know any sooner than anyone else. I tell them to watch the news for the announcements.”