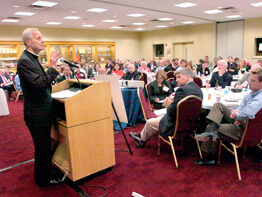 As educational leaders gathered Sept. 19 to collaboratively enhance struggling Catholic schools in the Mid-Atlantic states, they were reminded Catholic education is a unique institution that should persevere for the good of the church, community, country and future generations.

If the Catholic schools continue to take a piecemeal approach in dealing with dwindling enrollment in the urban and lower-income parish schools, more closings will be inevitable, Washington Archbishop Donald W. Wuerl told educators, clergy and lay people of the Mid-Atlantic Catholic Schools Consortium at the Summit on the Future of Catholic Schools.

“The cost of a Catholic education has to be in the reach of families and if they can’t afford it, their children can’t access it,” Archbishop Wuerl said during the summit’s keynote address. “If (rising tuition) continues, we’ll only see schools continue in affluent areas for people who can afford it. This was not the vision of (St.) Elizabeth Ann Seton.”

In the past two years, 23 Catholic schools have closed within the archdioceses of Baltimore and Washington and the dioceses of Arlington, Va., Richmond, Va., Wheeling-Charleston, W.Va., and Wilmington, Del., with the total loss of 2,607 students.

The consortium was formed to help the Catholic school system thrive in the future, by collaboratively seeking public and private funding, sharing educational methods and developing unique programs for the 340 schools and 117,687 students within the region, said Dr. Mary Ellen Hrutka, the consortium’s executive director.

“In our institutions, we need to educate the mind, heart and spirit,” he said. “We need to have a strong faith formation, even in the schools where a majority of the students are not Catholic. That is what sets us apart. The school is the instrument of faith formation and social justice.”
Creative methods must be developed to foster and enlarge Catholic education, Archbishop Wuerl said, given the limited resources available within the church.

“The school must be Catholic, through and through,” he said in detailing his strategic theories. “A diocesan-wide policy for equitable distribution of educational costs must be developed to maintain affordability, and that serious diocesan-wide strategic planning has to take place to ensure the survival of schools in a manner that allows Catholic education to truly be accessible throughout the diocese.”

The values taught in the Catholic school system offer all students confidence and its urban pupils hope for the future, Archbishop Wuerl said.

Statistics offered by the consortium suggest that 99 percent of Catholic school students in Maryland, the District of Columbia, Virginia, West Virginia and Delaware graduate from high school, 97 percent of the graduates pursue postsecondary education and the schools have a $1.3 billion economic impact in the Mid-Atlantic states.

The summit is one of several projects launched by the consortium in 2007.
Other projects included the publishing of a monograph detailing the challenges facing Catholic schools, the launching of a federal programs project to maximize the current level of federal benefits coming to the region’s Catholic schools and the initiation of a Web site to share resources on the syndicate’s work.

Funding has also been secured to provide contemporary leadership development for school administrators and pastors to identify ways that religious orders can build up the Catholic schools, Dr. Hrutka said.

“We have a generation who has not appropriated the teachings of what we believe,” Archbishop Wuerl said. “The word of God will give our students access to a world of grace. With every generation, the church starts all over again. It’s available to each person in each generation.”

With great admiration for the people empanelled at the Sept. 19 summit, Richard J. Dowling, executive director of the Maryland Catholic Conference, said he is confident the assembly will produce a national model for Catholic schools.

“Given the level of expertise and the support of the bishops to this, it’s a can’t-miss enterprise,” he said.

Archbishop Wuerl warned members of the summit that some of their findings may be a hard sell to some parish schools and to contributors who don’t understand that their tuition doesn’t pay for the entire educational system.
“Our hope is the collective work will sustain the great gift of our schools,” he said. “It’s been a struggle from the very beginning of Catholic education in this country.”