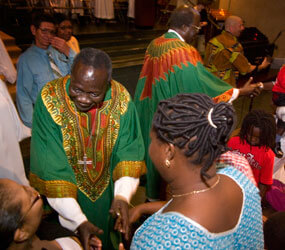 As a critical election in Southern Sudan draws near, Sudanese Catholic leaders are appealing to the United States and Western nations to speak out more strongly against violence that could plunge the African nation back into a full-scale civil war.

The Jan. 9 election will determine whether the South secedes from the North. It comes on the heels of a 2005 Comprehensive Peace Agreement that quelled decades of civil war between the largely Muslim North and a Christian and animist South.

“There will not be a free and fair referendum if violence is still taking a toll among the people in the South,” said Auxiliary Bishop Daniel Adwok Kur of the Archdiocese of Khartoum, speaking in a June 16 Webcast from Catholic Relief Services (CRS) in Baltimore.

“I think this has to be brought to a stop,” Bishop Adwok said. “People who need food need to be given food.”

Bishop Rudolf Deng Majak of the Diocese of Wau noted that 40 percent of the people who live in the South “suffer from one form of famine or another.”

“The humanitarian situation must be addressed,” he said. “People do not have seeds, or even if they do have seeds…there is too much fire power around to allow people to move about and to engage in anything that will enhance life.”

CRS recently launched a $4 million peace initiative in Sudan. Officials noted that last year, levels of conflict in Southern Sudan surpassed those in war-ravaged Darfur. Three soldiers and 10 militiamen were killed in a gun battle June 15 in the Jongli state.

Bishop Adwok said he was grateful for the presence of the United Nations in his homeland and for international humanitarian support. He believes the people of the South should be free to determine their own destiny and not be subject to intimidation at the polls.

“Let the people decide,” he said.

Bishop Deng, president of the Sudan Catholic Bishops Conference, said all parties must respect the sovereignty of the civilian population.

“Authority is supposed to serve and to listen to what the civil society wants,” he said, “therefore, if they come with the attitude that they are the master – regardless of what the civilian community thinks – they are embarking on the wrong path.”

Dan Griffin, CRS Sudan representative, said too much of the political conversation centers on what will happen next rather than what must happen now.

“Peace building can be taught now so that they have an alternative to this return to violence,” he said. “We can’t stand idly by and say we don’t know what to do.”

Bishops Deng and Adwok celebrated a June 20 Mass at St. Matthew in Northwood, a parish that includes parishioners from Sudan. St. Matthew sells free-trade chocolate, coffee and tea once a month. The proceeds support a clinic in Sudan, a school in Kenya and other international initiatives.

“It’s amazing what we’ve been able to send over,” said Father Joseph L. Muth Jr., pastor. “The letters we get back from the places we send money to are very encouraging and very grateful.”

During their visit to the U.S., the bishops also met with officials from the U.S. Conference of Catholic Bishops, Congressional leaders, U.N. officials and federal representatives.