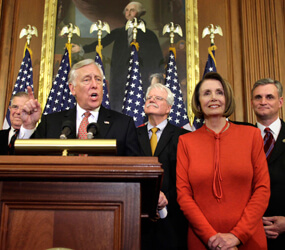 WASHINGTON – In the end, the successful battle to include strict language prohibiting funding for abortions, led by pro-life congressional Democrats with the strong support of the U.S. Conference of Catholic Bishops, is what made the difference in the Nov. 7 House vote to pass a sweeping health care reform bill.

In a rare Saturday night vote, the House approved the Affordable Health Care for America Act, 220-215, moving the legislation on to the Senate, which was expected to take up debate on its own health care bill later in November.

Assuming the Senate passes a version of the legislation, differences between the two bills will have to be reconciled separately. That legislation would go back to both houses of Congress for final approval.

Key to passing the House bill was the approval of an amendment by Rep. Bart Stupak, D-Mich., to prohibit the use of federal funds to pay for abortion, including barring abortion coverage from insurance plans which consumers purchase using government subsidies. The USCCB and other pro-life organizations had threatened to oppose any final bill that did not include such provisions.

The final bill fell short of another element pushed strongly by the church in recent weeks. It would bar people who are in the country illegally from receiving any government assistance to get health coverage. The U.S. bishops also had urged that the legislation allow all immigrants access to the health care system, regardless of legal status.

What the bill does do is expand health insurance to an estimated 30 million people who currently lack coverage, meaning an estimated 96 percent of Americans would have access to more affordable health care.

Various news sources as well as people involved on the Hill reported on the critical role of last-minute, behind-the-scenes negotiations among House leaders, White House staff, Catholic bishops and their staff. Also essential were talks with Stupak and others who were holding firm on withholding their votes pending acceptance of his amendment.

Chicago Cardinal Francis E. George, president of the USCCB, spoke with House Speaker Nancy Pelosi Nov. 6, encouraging her to let Stupak’s amendment come for a vote. Other bishops also weighed in by phone with various members of Congress, including by encouraging Republican leaders not to try to block progress that was being made in getting the abortion amendment passed.

When Stupak’s amendment was allowed to come to the floor, it was approved by a vote of 240-194, with the support of many Republicans who did not ultimately vote for the legislation itself.

Only one Republican voted for the overall bill, Rep. Anh “Joseph” Cao of Louisiana, a Catholic and former Jesuit seminarian who was elected in December 2008 to fill a vacancy created by the resignation of Democratic Rep. William Jefferson, who was forced out of office in a bribery scandal.

In a statement, Stupak, a Catholic who has spoken many times of his often lonely role as a pro-life Democrat in Congress, focused not on his successful abortion amendment, but on the overall bill, which he called the most significant reform to government and private health insurance programs since Medicare and Medicaid were created in 1965.

His statement noted that the bill includes reforms for both the uninsured and those who already have insurance. Medicare recipients will receive additional prescription drug coverage and be entitled to full coverage for preventative care.

Other components of the bill include:

– Insurance companies would be prohibited from discriminating against people with pre-existing medical conditions. They also would no longer be able to impose lifetime caps on benefits or cancel coverage for any excuse when policyholders become ill.

– It would give tax subsidies to small employers to help them provide insurance for their workers.

– It would create a health insurance exchange where people who are not currently covered through an employer-purchased plan, Medicare, Medicaid, Veterans Affairs or other government insurance could get coverage through private or federal providers.

In a press event in the White House Rose Garden Nov. 8, President Barack Obama said the legislation would “provide stability and security for Americans who have insurance; quality, affordable options for those who don’t; and bring down the cost of health care for families, businesses and our government, while strengthening the financial health of Medicare. It is legislation that is fully paid for and it will reduce our long-term federal deficit.”

He voiced his gratitude, “given the heated and often misleading rhetoric surrounding this legislation,” for the “courageous vote” of many members of Congress.

Sister Carol Keehan, a Daughter of Charity who is president and CEO of the Catholic Health Association, called the bill historic and said it “brings our nation closer to ensuring quality, affordable health care for everyone and to reversing the injustice of millions of un- and underinsured women, men and children.”

Her statement said the CHA believes the legislation “is consistent with the values and principles set forth nearly two years ago in ‘Our Vision for U.S. Health Care’ – principles that define the essentials in the critical areas of respect for the life and dignity of all persons; quality, fair financing; and patient-centered care that is available and accessible to all.”

“There is no perfect bill, nor will there be, but the leaders in the House of Representatives have crafted a good health reform bill that gets this nation a step closer to the health care system the American people deserve and can be proud of,” Sister Carol said.

Among those lauding the role of Stupak and his coalition in passing a bill with the abortion exclusion was Kristen Day, executive director of Democrats for Life.

“The House of Representatives answered the call of history today when they passed health care reform,” Day said. “While it would be tempting to call this a Democratic win, the truth is the American people are the winners of this hard-fought victory.”

She applauded Pelosi for clearing the way for the amendment and called Stupak and Rep. Brad Ellsworth, D-Ind., “heroic.”

Victoria Kovari, interim executive director of Catholics in Alliance for the Common Good, hailed the bill as “a victory for all people who believe in the fundamental dignity of every human life.”

“Catholics across the political spectrum speak with one voice in supporting health care reform that promotes the common good and protects the sanctity of all human life by providing families and children with quality, affordable health care,” her statement said.

Patrick Whelan, president of Catholic Democrats, said the vote signaled “a day for celebration among Catholics and all Americans who believe that life’s greatest test is how deeply we care for one another.”

He encouraged other Catholics who didn’t support the bill to follow Cao’s example. “This reform represents progress in helping our nation to realize the Gospel imperative of making health and healing available to all Americans.”

Whelan said: “Catholics have an innate understanding of the role universal health care coverage will play in promoting the common good. Now is the time to build on the success of the House bill and pass legislation that codifies our belief that health care is a fundamental human right.”

The National Council of La Raza, a Latino civil rights and advocacy organization, said the bill brings millions of people closer to obtaining health care coverage. Proportionally, more Latinos are uninsured than other groups of Americans, it noted, and the House legislation would make health care more affordable and accessible.

However, the organization’s president, Janet Murguia, noted in a statement that the House bill “is still too tough on legal immigrants and their access to public health care.”

She said the House legislation would continue a mandatory five-year bar on legal immigrants receiving publicly funded care if they need it.

“To promote an equitable system for all, restrictions on legal immigrants’ access to federal aid such as Medicaid, Medicare and the Children’s Health Insurance Program must be removed,” it said. “Furthermore, roadblocks to insurance must be eliminated by removing excessive verification requirements that raise costs, increase barriers to health care, and have been proven to harm many U.S. citizens.”