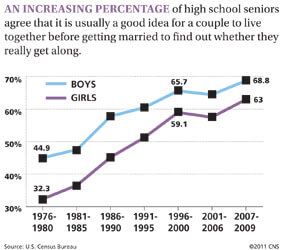 WASHINGTON – While studies have long shown the negative effects on children of divorce compared to those from two-parent households, a new study has determined that children born to cohabiting couples fare even worse than children from divorced families.

Despite a drop in the divorce rate, “family instability continues to increase for the nation’s children overall, mainly because more than 40 percent of American children will now spend time in a cohabiting household,” according to the study, “Why Marriage Matters,” issued Aug. 16 by the Center for American Families at the Institute for American Values and the National Marriage Project, based at the University of Virginia.

The study found that children born to cohabiting couples are much more likely to experience a parental breakup compared to children born to married couples – 170 percent in unmarried households with children up to age 12.

Not only is cohabitation less stable, it is more dangerous for children, according to the study. Federal statistics show that children are at least three times more likely to be physically, sexually or emotionally abused in cohabiting households, compared to children in intact, biological married-parent homes. They are also significantly more likely to experience delinquency, drug use and school failure.

“If Mom is living with a boyfriend, they may have less trust, less emotional security in their relationship, less sexual fidelity,” said W. Bradford Wilcox, a researcher at the University of Virginia and lead author of the report.

“And all of these characteristics in a relationship, which aren’t good, seem to bleed over into these kids’ lives. If Mom and Dad are cohabiting,” he added, “that’s going to be corrosive to the kids’ sense of security in their own lives.”

Wilcox, who presented some of the report’s findings Aug. 20 at the American Sociological Association’s convention in Denver, told Catholic News Service the rate of cohabitation is rising.

“Yes, people have seen divorce in their own family lives and or seen friends get divorced or whatever, and that’s made them gun-shy about getting married,” he said. “But I also think that some people have responded to their parents’ divorce by developing a kind of deepened dedication to marriage. For those getting married today they’re trying to work harder on their marriages than their parents did.”

Sheila Garcia, associate director of the U.S. bishops’ Secretariat for Laity, Marriage, Family Life and Youth, said she looked askance at the notion of cohabitation as “an acceptable alternative to marriage. People today tend to be very individualistic and they look into what is good for them,” Garcia said. “They enter into a cohabiting relationship based on what will make them happy, but it does not take into account what is good for the children.”

Garcia cited another concern. “We’ve noticed for a few years now a marriage gap, which means that people who are better educated and wealthier are more likely to marry than those who don’t have those advantages,” she told CNS. “People who are considered working class are less likely to marry. There are economic benefits to marriage. And when married is not valued among the working class as it has been, that’s a problem. Marriage is a wealth-building institution.”

The “Why Marriage Matters” report concurred. “Marriage is an important public good, associated with a range of economic, health, educational, and safety benefits that help local, state, and federal governments serve the common good,” it said. “The benefits of marriage extend to poor, working-class, and minority communities, despite the fact that marriage has weakened in these communities in the last four decades.”

Monsignor Labib Kobti, pastor of St. Thomas More Parish in San Francisco, has a pastoral fealty to the sacrament of marriage. “Our (patron) saint has died defending weddings,” he said. More was beheaded in 1535 for opposing Henry VIII’s divorce and refusing to renounce papal authority.

The San Francisco priest was planning a mass Catholic wedding ceremony on Labor Day, Sept. 5, for 30 couples who have been only married civilly. But Monsignor Kobti hears from Catholics who are in cohabiting relationships as well. “During confession they tell you (about it) and you have to tell them, ‘Look, get married, let me help you. We are not asking for money. We just want to help you. You are confessing you know this is not regular, this is not right … and you want something better.’“

Outside the confessional, he told CNS, “they come when they have problems. Now we are organizing something like Marriage Encounters where we meet once a month with couples and to speak about marriage with the groups, and we tell them about the difficulties of life and we try to help them spiritually.”

The church teaches that any sexual activity outside of marriage is sinful. If a cohabiting couple seeks to be married in the church, many diocesan marriage preparation policies suggest that pastoral ministers encourage the couple to live apart until the wedding.

Statistics on the webpage of the U.S. bishops’ Secretariat for Laity, Marriage, Family Life and Youth say that “almost half the couples who come for marriage preparation in the Catholic Church are in a cohabiting relationship.” It also notes that the Official Catholic Directory reported 406,908 couples married in the Catholic Church in 1974; in the 2011 directory it reported that 170,172 couples married in the church.

According to the “Why Marriage Matters” study, “Departures from the norm of intact marriage do not necessarily harm most of those who are exposed to them. While cohabitation is associated with increased risks of psychological and social problems for children, this does not mean that every child who is exposed to cohabitation is damaged,” the report said.

“For example, one nationally representative study of 6- to 11-year-olds found that only 16 percent of children in cohabiting families experienced serious emotional problems. Still, this rate was much higher than the rate for children in families headed by married biological or adoptive parents, which was 4 percent.”

However, it said, “the intact, biological, married family remains the gold standard for family life in the United States. Children are most likely to thrive, economically, socially, and psychologically, in this family form.”