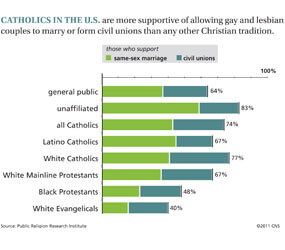 WASHINGTON – American Catholics are more tolerant than Americans in general and members of other Christian denominations on a variety of issues concerning homosexuals and same-sex couples, according to a study issued March 22 by the Washington-based Public Religion Research Institute.

Catholics, when surveyed on their attitudes, are more accepting of same-sex marriage, especially when civil unions are offered as an option. They also are more likely to support laws banning employment discrimination against gays and lesbians, support homosexuals serving openly in the military, and support same-sex couples adopting children.

The degree of support by Catholics on these issues is often five or more percentage points above that of Americans in general, as well as above mainline Christians and evangelical Christians, according to Robert Jones, CEO of the Public Religion Research Institute, a nonprofit, nonpartisan research and education organization that focuses on the intersection of religion, values and public life.

The difference in attitudes based on respondents’ age is even more pronounced among Catholics, according to Jones. More than twice as many Catholics under 35 as those over 65 support same-sex marriage.

“Catholics are less likely (than other Christians) to have moral objections” on same-sex issues, said Daniel Cox, the institute’s research director, during a March 22 conference call with reporters. “A solid majority of Catholics did not see sexual relations between two members of the same sex as a sin.”

The study’s results were confirmed by Stephen Schneck, chairman of the politics department at The Catholic University of America, Washington, and director of the university’s Institute for Policy Research & Catholic Studies.

“Catholics are less conservative than the American public overall … in their acceptance of same-sex relations, even in (support of) the ordination of (women) clergy,” said Schneck, who added that he is opposed to same-sex marriage.

The Public Religion Research Institute’s study said: “Nearly three-quarters of Catholics favor either allowing gay and lesbian people to marry (43 percent) or allowing them to form civil unions (31 percent). Only 22 percent of Catholics say there should be no legal recognition of a gay couple’s relationship.”

But Schneck noted that those results could also be interpreted to mean that, when combining the number of those who support only civil unions with those who oppose same-sex marriage, then 53 percent of Catholics would be against same-sex marriage.

The Catholic Church teaches that the dignity of homosexual individuals must be respected as well as their rights as people, such as the right to employment and freedom from unjust discrimination. But the church upholds the sanctity of traditional marriage as being only between one man and one woman. The church also teaches that any sexual activity outside of marriage is sinful.

The U.S. bishops have identified “strengthening marriage” as one of their five priority goals through 2011, with their website noting that one principal aim is “to work for laws and public policies that recognize marriage as a union of a man and a woman, strengthen family life and protect religious liberty.”

Catholics responding to a telephone survey conducted last fall said they heard messages on the issue of homosexuality from the pulpit less often than members of other faiths said they heard such messages. However, Catholic respondents said the messages they did hear were more negative than messages other Christians said they heard in their own churches.

A press release said the study also drew on an analysis of existing data from the Public Religion Research Institute and other sources, including the Pew Forum on Religion & Public Life.

However, only 39 percent of Catholics give their own church top marks – a grade of A or B – on its handling of the issue of homosexuality, while majorities of members of most other religious groups give their churches high marks.

“Americans don’t like it when bishops and priests get involved in what they see as political issues,” said Michele Dillon, professor and chairwoman of the sociology department at the University of New Hampshire and past president of the Association for the Sociology of Religion. “Notwithstanding the recent congressional elections, I think the political currents are more toward liberalization” on same-sex issues.