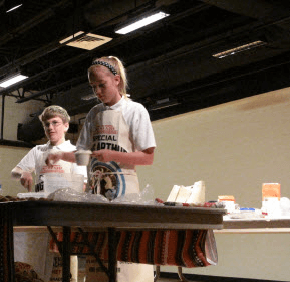 FREDERICK – Donning aprons nearly as long as they are tall, Lexi Stewart and William Gouker were pint-sized bakers, stirring ingredients and kneading dough during a bread making demonstration.

With help from a baking pro, Lexi and William, fifth-graders at St. John Regional Catholic School (SJRCS), showed nearly 250 of their peers in grades four through seven how to make bread.

Students each received four pounds of flour, a recipe booklet and a yeast packet, among other items, to make two loaves of bread over the weekend – one for themselves and the other for the Frederick Rescue Mission, which offers meals and shelter to those in need.

Paula Gray, manager of the Norwich, Vt.-based King Arthur Flour Company, Life Skills Bread Baking Program, was at SJRCS Sept. 28 to teach students how to make bread and share in the joy of baking.

“The donation piece is very important,” said Gray, who noted materials are paid for by King Arthur Flour.

Gray incorporated math and science skills into the demonstration, including fractions, hypotheses and estimating.

“A recipe is just an equation,” Gray said. “When you bake you have to be exact.”

“You’ll know how to bake bread forever,” Gray said, “which is a really great skill.”

Lexi and William were ecstatic to know one of their loaves of bread will help someone in need.

“It helps people by just letting them know that Catholics and other religions are taking a stance and helping them get their daily needs,” William said.

“It was a good connection,” Smith said. “The seventh- and eighth-grade science teacher was very happy.”

On Sept. 27, Gray put on the same demonstration for 250 students in grades four through seven at the parish school of Church of the Resurrection, Ellicott City.

“Our theme is the potter and the clay and truly God isn’t finished with us,” said Karen Murphy, principal of Resurrection-St. Paul School. “What I told the students was this is exactly what fits into our theme. The kids were just excited. It’s a brand new experience for most of them.”

The Ellicott City school is donating 100 loaves to Beans and Bread in Baltimore and 150 loaves to the Howard County Food Bank in Columbia.