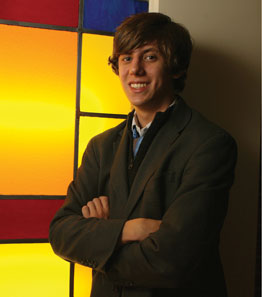 Some kids play sports, others are in the marching band and then there are those like Calvert Hall College High School, Towson, senior Brady Vontran, who start a foundation that raises more than $50,000 and collects more than 4,000 toys for critically ill children.

In 2001, while he was still a student at Our Lady of Hope, Dundalk, Brady launched Brady’s Heart Foundation to collect toys, household items and money to help critically ill children.

“All of my life people have helped me out, taking care of me, and I figure now that everything is back to normal I would help people in need,” said Brady, who was born with a severe heart defect called tetralogy of fallot.

When he was two weeks old, he underwent heart surgery at The Johns Hopkins Hospital in Baltimore. Three more surgeries followed, including back surgery for scoliosis that involved placing 20 screws in his back to straighten it and relieve pressure on his heart.
Once while Brady was in the hospital, the Children’s House at Johns Hopkins, run by the Believe In Tomorrow National Children’s Foundation, presented him with a gift. So the teen figured the group would be a good target for his foundation, “kids with problems like me.”

He asked friends, family and a few local businesses, as well as everyone who attended the family’s annual holiday party, to donate a gift. That first year he collected 350 toys; the following year he collected 3,500 toys. “It snowballed,” he said. “Then money donations started to come in.” He decided to help the Believe In Tomorrow House at St. Casimir, too.

When the teen conducted a letter-writing campaign to spread the word quickly, the checks poured in.

“He got a check from Paul Newman,” recalled Mrs. Vontran with a laugh, “and he said, ‘Who’s Paul Newman?’ He thought it was just the salad dressing guy.”

What’s different about Brady, said Brian Morrison, the founder of Believe In Tomorrow, is the length of his commitment. It’s not unusual, he said, for a kid to do something once or twice, but Brady continues to help.

“Brady is an extraordinary young man,” Mr. Morrison said. “The work Brady and his family do to support Believe In Tomorrow has been equally extraordinary. That level of support on such a grand scale has really touched the lives of the people we serve. Brady started years ago raising money and toys and he did it to a monumental scale.”

On Nov. 5 the Association of Fundraising Professionals presented Brady with the Outstanding Youth Fundraiser Award, and he’s been featured in an ad for the Johns Hopkins Heart Institute.

Brady, who has a slight build and is quiet, says that his health is normal now, but he can’t play contact sports because of the screws in his back. That’s not really a hardship because he prefers playing his guitar and bass.

Because he had to restrict his activities, Brady also turned to playing video games and hopes to pursue a career in designing them. He’ll attend the University of Advancing Technology in Arizona next year to study game design.

His mom praises Calvert Hall, which worked with Brady when he had to miss six weeks for his back surgery, and his family appreciates the prayer lists Brady was on.

Brady plans to continue the foundation while in college, and he displays a quiet courage about the experiences that led him to start it.

“I just played the cards I was dealt,” he said. “I couldn’t do anything about it, so I just had a positive attitude.”

“We deal with it when we have to deal with it, otherwise, we just live our lives,” said Mrs. Vontran.

“Everybody helped me out,” Brady said. “I’m thankful for my friends and family that were given to me – if it weren’t for them it would be a lot tougher.”