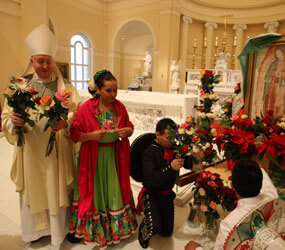 In a historic basilica honoring the Blessed Virgin, the joyful noise of drums and maracas rang out as Baltimore’s Hispanic population celebrated the feast of Our Lady of Guadalupe.

The Basilica of the National Shrine of the Assumption of the Blessed Virgin Mary was full as several hundred Hispanics professed not just their faith but also their tradition.

In December 1531, the Blessed Virgin Mary appeared to the peasant St. Juan Diego on Tepeyac Hill, near what is now Mexico City. She left her image on his cloak, or “tilma,” and his uncle was miraculously cured of a deadly illness. Her appearance and the cloak’s image converted the nation, and within a short time six million natives were baptized as Christians; today Our Lady of Guadalupe is the patron of the Americas.

The day’s celebration began with a police-escorted motorcade carrying the image of Our Lady of Guadalupe from Our Lady of Pompei Church at 229 S. Conkling St. to the basilica.

Four women wearing long, brightly colored dresses and five men carried the wooden platform, lavishly decorated with roses and bearing the image of Our Lady of Guadalupe, up the aisle. Behind them came a drummer, and then a procession of children shaking maracas and wearing black vests decorated with images of Our Lady, images that shimmered thanks to generous use of gold glitter and sequins. Some children had affixed clear plastic over the images to protect them from the day’s steady rain.

They were followed by an honor guard made up of Hispanic Scouts. Behind them came a brigade of tiny, dark-haired children bearing roses; the first of them, barely older than toddlers and wearing elaborate dresses, evoked universal smiles.

A troupe of costumed dancers wove up the aisle, some wearing sombreros and masks with long beards and others dressed as a beast and Satan. The dance represented all of the people devoted to the Virgin.

Then the Spanish-speaking priests, deacons and seminarians of the archdiocese, followed by Archbishop O’Brien, Bishop Rozanski and Cardinal Keeler, processed to the altar.

“This is the message of Guadalupe that has echoed throughout these past 478 years – God lives among his people: a presence that has not diminished, eroded or dimmed,” Father Mateus-Ariza said. “The amazing thing is that God does not choose the powerful or the strong, but seeks the weak and the lowly to be his messengers and carriers of the gospel of hope.”

“The humble and lowly servant of Mary, Juan Diego, thought that he was just bearing flowers to the bishop,” he continued. “Instead he would become the bearer of the virgin’s image, not just to the bishop, but to all of God’s children who seek hope, peace and consolation. Through the image of Guadalupe, Mary would draw millions of people to her Son, and today she continues her role as mother of the Church and bears Christ to a world in need of his grace.

“Just as Mary was persistent with her son during the wedding feast at Cana to perform his first miracle, just as Mary was persistent with Juan Diego to take her message to the bishop … so is Mary persistent with all those who are called by her son to share in the priesthood. Mary does not give up. Mary continues to be persistent and there will be priests for her Church. Gently, but determined, she is calling … like Juan Diego those called will find it hard to say no … our Mother Mary, the mother of all priests, already has everything taken care of and will provide for her sons. It is time to step forward. It is time to answer the call. It is time to begin the journey.”

After Mass, Martin Avelar, a native of Mexico and a parishioner of St. Patrick in Baltimore, explained, with the help of his son translating, “Because of the Virgin Mary, we celebrate.”

Roberto Reyes and Luz M. Castillo, volunteers from St. Mary’s in Annapolis, struggled with English to explain their willingness to volunteer at the Mass.

“The Virgin for us is the lady of the Americas,” Reyes said.

“We like to show our traditions,” said Nancy Casillas, 14, of St. Joseph in Fullerton. “We enjoy showing our costume and our religion.”

Germán Flores, a native of Venezuela and a parishioner of Holy Trinity in Glen Burnie, said he felt it was vital that the Hispanic community realize the importance of being part of the lay community of the archdiocese.

“I believe the Hispanic community has a great gift to bring to this community,” he said, noting the tradition and concept of family in the Latin American culture could also benefit families here, and Hispanics could enrich the already rich culture.

“I do feel really proud of my background,” he added. “It’s nice to be part of an archdiocese that has so much prominence and so much history.”

He said many Hispanics struggle to become involved here because of the language barrier, but he pointed to a group of young children.

“Those children will be the ones to get the language,” he said.