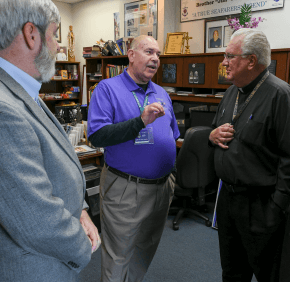 By Erik Zygmont
ezygmont@CatholicReview.org
Twitter: @ReviewErik
It is uncertain when the 18 seafarers stranded aboard the Newlead Grandino, a shipping vessel out of Malta, will be able to return home, but the Apostleship of the Sea at the Stella Maris International Seafarers Center in Dundalk is seeing to their human and spiritual needs in the meantime.

“I would think they’re very sad – very angry, I guess, because (the stranded seafarers) are caught in the middle of a rock and a hard place and they can’t do anything to resolve their own situation,” said Monsignor John L. FitzGerald, executive director and chaplain of the Apostleship of the Sea.

The Newlead Grandino, which has recently been designated unseaworthy by the U.S. Coast Guard, is anchored at a point near the entrance to Baltimore Harbor. According to news reports and Monsignor FitzGerald, the company that owns the ship is unable to address the situation.

“The company that owns the ship has abandoned the ship,” Monsignor FitzGerald explained. “They have gone bankrupt, we understand – we don’t know – and the crew is not receiving their pay.”

The crew had been unable to come ashore, and the ship has been stuck for almost two months.

“They had no food, no heat, no air conditioning,” Monsignor FitzGerald said. “I’m told the seafarers were brushing their teeth with saltwater; they had no toothpaste.”

While authorities are trying to find a way to get the crew home, the Apostleship of the Sea is among several organizations working to make their situation bearable in the meantime.

“We’re doing everything we can for these international seafarers, to get them food and to get them clothing,” Monsignor FitzGerald said.

He noted that approximately 60 percent of international seafarers are Catholic, and the Apostleship of the Sea is just as happy to also serve the remaining 40 percent.

For the crew of the Newlead Grandino, an asphalt shipper, Monsignor FitzGerald mentioned the possibility of an onboard Communion service, “or maybe even a Mass aboard the ship.”

Thanks to the Knights of Columbus of Maryland, the crew now has a television that can pick up American stations.

“Any time we have the opportunity to serve, help out or assist those in need, we’re there, and that’s what the Knights of Columbus is all about,” said Stephen Cohen, state deputy for the Knights. “Monsignor called and said he needed a TV. We made one phone call, and the next thing I know, I got a call back and we had the TV.”

It is unknown when the crew’s situation will be resolved.

“This could go on for months,” Monsignor FitzGerald said, remembering a previous incident which had left a ship in the harbor for about a year. “We’re hoping this resolves much quicker, and there’s hope that it will,” he said. “What happens to the ship, I don’t know, but, frankly, I’m more interested in what happens to the crew of the ship.”