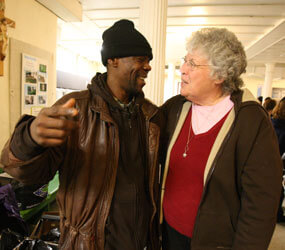 Forming a long line that looped around the old church, the mostly male guests waited patiently for the hall’s doors to open so they could enjoy the weekly free meal offered there.

Some were addicted to drugs or alcohol. Several recently lost jobs. Others suffered from mental or physical disabilities. For many, this would be the only substantial meal of the day.

As Deacon Edward Stoops held a batch of admission tickets, a middle-aged man in tattered jeans patted him playfully on the back and offered a craggy smile.

Inside the hall, volunteers from Our Lady of the Fields, Millersville, and other parishes were readying for the crush of nearly 300 hungry visitors.

They filled long tables with freshly made lasagna, dozens of hard-boiled eggs, coleslaw, fruit salad, pulled-pork, baked potatoes, collard greens, cakes, pies and more. There were also ham-and-cheese sandwiches, bananas, crackers and granola bars for the visitors to take home on their way out.

Jay Speller, a 52-year-old homeless Baltimorean who lives at the Code Blue Shelter, called the Friday-night meals a blessing.

“The Lord provides this for us through them,” said Speller, nodding to Deacon Stoops and the deacon’s 74-year-old wife, Francine – the driving forces behind the outreach. “They really are two of the most beautiful people you’d ever meet.”

The palpable love for the Stoopses runs deep among the guests – many of whom have turned to the weekly meal for years, and, in some cases, a decade or more. It goes beyond just having a meal. The Stoopses have sparked hope and, for many, a profound new life.

It all began with blankets

The Stoopses’ outreach to the homeless began in 1991when their daughter, Kate, heard on the local news that the city was collecting blankets for the homeless during a bitter cold spell.

Kate and her two daughters brought a bundle to City Hall. After noticing stacks of blankets, Kate asked a guard when they would be distributed.

“He told her not for another day,” Deacon Stoops recalled.

Shocked that the homeless wouldn’t have blankets when they were most needed, Kate took it on herself to pass out as many as she could directly on the streets. Some of the homeless people she encountered asked for something to eat as well, which sparked the idea for a weekly meal. Soon Francine was cooking meals, then neighbors and other parishioners got involved.

The location for the makeshift ministry was originally at the War Memorial Plaza in front of City Hall, but later shifted to the Oasis Men’s Shelter and then the parking lot across the current Our Daily Bread soup kitchen.

The ministry moved indoors at St. Vincent at the invitation of Deacon Bill Pearson who served at the parish.

Deacon Stoops estimated that the ministry serves an average of 200 people a week, with more people looking for help at the end of the month as paychecks run out. Volunteers from several parishes, Catholic schools and other groups prepare the meals and staff the outreach. Deacon Stoops wishes even more would step forward so the ministry could be expanded to other locations on other nights of the week.

Francine Stoops, who is affectionately known as “Big Momma” by a few of the guests, said the ministry is almost wholly uncoordinated. Volunteers just show up, she said, and somehow the work gets done. Some nights there are 15 workers and on others it can top 40.

“When I’m here, it’s the highlight of my week,” Francine said. “Our life is built around this. It’s the most wonderful thing to be able to do this.”

Standing in a corner near the restrooms of St. Vincent de Paul’s hall while volunteers carried boxes of food into the serving area, Robert Saunders ran a pair of clippers atop a man’s thick head of hair. As black strands floated to the floor, the 35-year-old barber glanced down the small line of people awaiting their turn in the chair.

“I used to live in the homeless park (at St. Vincent de Paul),” said Saunders, a convert to Islam who gives free haircuts to the homeless almost every Friday at the parish before the meals are served. “I started coming here to get something to eat. This is my way of giving back.”

Saunders’ story of new life is a familiar one to Deacon Stoops. Many formerly homeless people keep coming back to the ministry week after week to help serve meals, provide security or clean the hall.

Donte Wesley, a 32-year-old formerly homeless man, met the Stoops family at one of their weekly meals. They took him into their home for two weeks and found him a handyman’s job at their parish. Now, he helps serve meals to people who were once in his shoes.

“They made my faith stronger,” he said.

“If it weren’t for this place, I wouldn’t know where I’d be,” she said. “You never forget where you come from. They helped me, now I want to help them.”

As the homeless guests left after enjoying the Feb. 19 meal, Deacon Stoops gave them donated socks and clothing items. Greg Cavanagh, a 13-year-old eighth grader at the School of the Incarnation in Gambrills, also made First Aid kits that were distributed.

Clutching a gnarled wooden cane, Deacon Stoops said he loves his ministry and those he serves even more.

The Stoops family was honored at the 2010 Social Ministry Convocation with the John Hook Award, presented to parishioners who show extraordinary commitment to social ministry.