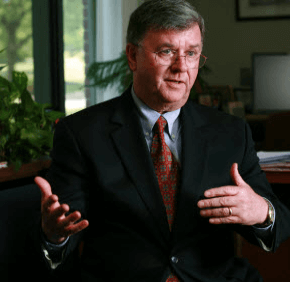 By Paul McMullen
pmcmullen@CatholicReview.org
STEVENSON – Organization and the ability to manage risk are essential to an entrepreneur.
Belief in a higher power also goes a long way, from where Kevin Manning sits – or more accurately, drives, as he makes his way between the two campuses of Stevenson University.
In 2000, Manning assumed the presidency of what was then Villa Julie College, which was founded by the Sisters of Notre Dame de Namur in 1947 as a one-year business school for women and went independent in 1967.
Under Manning, it has used additional majors, the acquisition of a second campus in Owings Mills, a name change, an ambitious athletic expansion and a speakers’ program that has featured the likes of President Bill Clinton to grow from 1,500 undergraduate students to 3,200 and become the state’s third largest independent university.
“Transformational leadership requires both optimism and faith,” said Manning, a parishioner of the Catholic Community of St. Francis Xavier in Hunt Valley who says that he – and, by extension, Stevenson – wouldn’t be where they are today without his Catholic identity.
“We don’t know as much about organization and leadership as we do miracles,” Manning said, “because most of this stuff cannot be explained.”
His father emigrated from County Westmeath in Ireland, and his mother’s parents followed a similar path. His dad managed a shoe store on Long Island, mom was a homemaker and they sent their four children to a parish school in East Islip, then Seton Hall High in Patchogue, both in Suffolk County.
The School Sisters of Notre Dame staffed the parish school, and reinforced the value of working hard. The high school was run by the Sisters of Charity of Halifax, who raised that ethic to another level, one he said required more diligence than attaining his Ph.D.
“High school was in many ways more demanding than the other experiences I had,” Manning said. “Through that, you know you are going to shoot for excellence, do the best job you can.”
Before coming to Stevenson, Manning spent 16 years at Immaculata University outside Philadelphia, the only layperson on an executive team whose other five members were Immaculate Heart of Mary sisters.
“Even though we’re not a Catholic university,” Manning said, “part of my success is that I have spent a good part of my life in Catholic schools.”
Expanding as the applicant pool was shrinking, Stevenson added majors in growing fields such as Medical Technology and a residential campus that encompasses what had previously been the home of the Baltimore Ravens.
“If we could pull off the residential campus, we could grow,” Manning said of the vision for Stevenson. “We added football, that was 100 (additional) students. Marching band, another 100; criminal justice major, another 200. Those things add up.
“You have to have the attitude that it’s going to work … so it works.”
Several Stevenson coaches came from Catholic institutions, among them women’s basketball coach Jackie Boswell, who built a power at Seton Keough High School in Baltimore.
“I’ve seen a lot of colleges say they want to be a national power, but they’re not willing to put in the resources,” Boswell said. “Dr. Manning has changed Stevenson in a short period of time. He shares his vision with the faculty, so that everyone has a common base.”
Driving a 14-mile loop between his office in Greenspring and the Owings Mills campus, Manning points to the former Rosewood State Center.
“Our intention is to buy all of this over here,” Manning said. “That would give us 350 contiguous acres here (in Owings Mills) and set the stage to grow to 7,000 or 8,000 students over the next 10 years.”
At an institution where the operating budget has already grown from $25 million to $135 million in 13 years, according to Manning, that would add considerably to a workforce that currently numbers 299 full-time and 262 part-time employees.
Manning, 68, was honored March 14 by the Hibernian Society of Baltimore, which was founded in 1803. Past recipients of the Hibernian of the Year include Cardinal Lawrence Shehan and William J. McCarthy Jr., executive director of Catholic Charities of Baltimore.
“Kevin’s vision of a quality academic institution that has a profound impact on the lives of people and community is being realized,” said McCarthy, who noted that his leadership goes beyond Stevenson. “Kevin has been a loyal supporter of the work of Catholic Charities. He is a wonderful steward to the community.”
March 15, 2013 CatholicReview.org
PrevNext