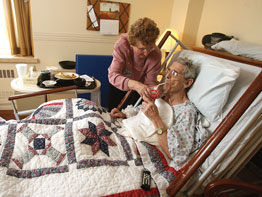 When James P. O’Conor Jr. was diagnosed with pancreatic cancer and it became clear that treatment would not be successful, his younger brother took solace in the fact that James was able to spend his final days at Stella Maris.

The Timonium facility operates a hospice care program for terminally ill individuals that has a tradition of quality care.

“They made an extremely difficult situation as palatable as possible,” said Sean O’Conor, a principal at O’Conor and Mooney Real Estate. “Both of my parents are still living, and one of the toughest things is to lose a child, and they made the surroundings very pleasant. There were counselors there who could help, and the nurses were incredible.”

According to its marketing department, Stella Maris is one of the first hospice units in Maryland and provides both inpatient and home care.

Sister Karen McNally, R.S.M., chief administrative officer for Stella Maris, was involved in the planning and actual startup of the program 25 years ago.

“Hospice has always been near and dear to my heart,” she said. “Our goal was then, and has always been, to create a program that enabled individuals to live as fully as possible for whatever life expectancy they may have.”

Stella Maris features lounge areas, a play area and TV room for children as well as decks and verandas.

“The quality of the professional care, as well as the support, comfort and compassion that my relatives received gave me a true sense of peace at the time of their deaths,” she said.

Mr. O’Conor, who serves on the advisory board of Stella Maris, said his 57-year-old brother’s room was large enough that his family was able to spend the night with him during the two weeks he was there.

“It was very important to them to have that time there,” said Mr. O’Conor, who said his brother was married with two young children.

He said his brother, a St. Joseph, Cockeysville, parishioner, had a slew of visitors, but was able to spend most of his time with his family.

Even in his final days, when the cancer had spread and he had difficulty breathing, James O’Conor was made comfortable, said Mr. O’Conor, still emotional after his brother’s death Aug. 9.

“The nurses were able to administer enough medication to calm him and make him comfortable,” Mr. O’Conor said, noting that the nurses treated his brother like family.

“I never got the sense that this was a job for them, but that they truly cared about what they were doing.”